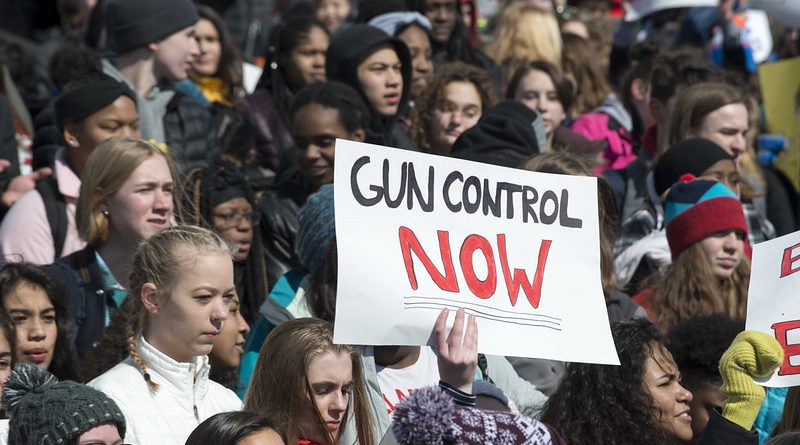 A sign at the March For OurLives student protest for Gun Control. Photo Credit: Fibonaci Blue via Flickr

There have been at least 19 deadly mass shootings in the United States so far in 2019, which had claimed the lives of innocent civilians. Ostensibly, what is certain is that these types of shootings are often carried out in analogous ways: a gunman, working alone or in a pair, targeting vulnerable people and places: Shopping Centers, Nightclubs, Churches, Synagogues, Elementary and High schools and countless of other places. According to the “Centers for Disease Control”, “39,773 deaths by firearm were reported in 2017.”

While gun violence increases, white supremacists are emboldened by repugnant discourse that continues to promulgate through 1600 Pennsylvania Avenue, an avenue that is supposed to be considered a safe haven for American civilians. Trump’s recent objections at recent rallies and before last year’s midterm elections are the genesis of this upheaving dilemma, President Trump announced to his supporters that the border was under attack, “You look at what is marching up, that is an invasion! That is an invasion,” he asserted.

Nine months later, a white man, walked into a Walmart, in El Paso, Texas, killing 20 innocent people and wounding dozens more after writing a detailed manifesto paling behind Trump’s rhetoric—“This attack is a response to the Hispanic invasion of Texas,” the 21-year-old, writes. Albeit the El Paso shooting suspect has been indicted on capital murder charges, the lives of those lost cannot be replaced—their loved ones continue to mourn, mired in sorrow, salvaging all that they can to remember what was.

America, the land of the free and the home of the brave—when does this stop?

The gradually entwined threat posed by gun violence and white nationalist have wreaked havoc in our fine nation—a baleful threat that is being exhilarated by Donald Trump’s presidency—a presidency concocted on hate, fearmongering, separation and divisiveness. And let us not overlook his earlier immigration policies: In the wake of the San Bernardino shooting, Trump banned Muslims from entering the country. In light of the Orlando nightclub shooting—fifty casualties; he called for the banning of refugees from countries that have “terrorist presence.” With his wonted grandiosity, President Trump seems to side with white supremacist organizations and the National Rifle Association, an avid supporter of his, in the wake of a widespread gun epidemic. Of the 50 deaths caused by domestic extremists in 2018, “White supremacists were responsible for the great majority of killings,” according to the Anti-Defamation League. There are plenty of bipartisan pieces of legislation and executive action that could be put into effect immediately to reduce gun violence, but the President and Senate Majority Leader Mitch McConnell keeps blocking gun reform laws, saying gun control legislation is “up to the president” and refusing to cancel the chamber’s August recess to hold a hearing on the senate floor.

The President of the free world should stop reassuring white nationalists that they have a platform to disgorge hate. The actions of the right-wing are discernibly undermining the security of manyAmerican people. Americans should not be fearful to walk out of their homes without being shot by a deranged person, who hates certain kinds of people. We simply can’t continue to allow this to happen. No more small talks about what should be done; no more calling for gun control; Americans need to be reassured that their lives will not be cut short by an AR-15.

President Trump seems to backtrack on expanding gun background checks in defiance of millions of Americans across party lines who vehemently support law enforcement to provisionally seize weapons from troubled individuals and expanded background checks for gun buyers. Although speaking in favor of stronger background checks, Trump revised his stance on this position after he met with a leader from the National Rifle Association. He, once again, receded and silence triumphed. It has always been a trial to determine President Trump’s position on key issues; Trump is not doing enough for the American people, he is not making American’s feel innocuous. The power that he holds is fueled by corruption. We don’t see it in his action. He is not serious about gun control and lacks basic conviction. His outright policies on gun control are nebulous and it is said that weeks after mass shootings, his administration moves on like nothing happened and he continues to tailor potpourri of lies after lies and gun control talks crumble while innocent civilians die.

Amid the perils, all of this is inconsequential to Trump because he believes that this troublesome epidemic is about mental health, not guns. What is troubling about that is, we forget the lives lost, we don’t call domestic terrorism by its name, we don’t hold people culpable, we filibuster about what needs to be done; instead of what has to be done, we listen to the National Rifle Association instead of constituents, we refuse to sign bipartisan gun control policies because we simply don’t care. Thoughts and prayers are not the jobs of a politician—making law is. Americans repeat the cycle of mourning ad nauseam. It must stopped! Politicians must act.

From Synagogue shootings, school shootings, movie theatre shootings, and college campus shootings, I believe if we don’t gun for love or prowl after affection—our country will become a slaughter-state—where an eye for an eye will be the new narrative—the new end. We have to speak to each other about our differences, we have to go about the world with our differences. Senseless violence is not the way to heal our deepest fears, our deepest trepidations, our deepest inadequacies—it ravages life’s purpose to live a good life in longevity without fear of dying, without blood on the shirts or hands of heroes, who risk their lives to save people from gunshot wounds, in the greatest nation in the world.

I want all, who are in power to remember the crying, the begging and endless screams from the mouth of innocent Americans and beyond. Let that sink in. Let it sound through the body, breaking hearts until something is done—until love conquers fear—until this stops.