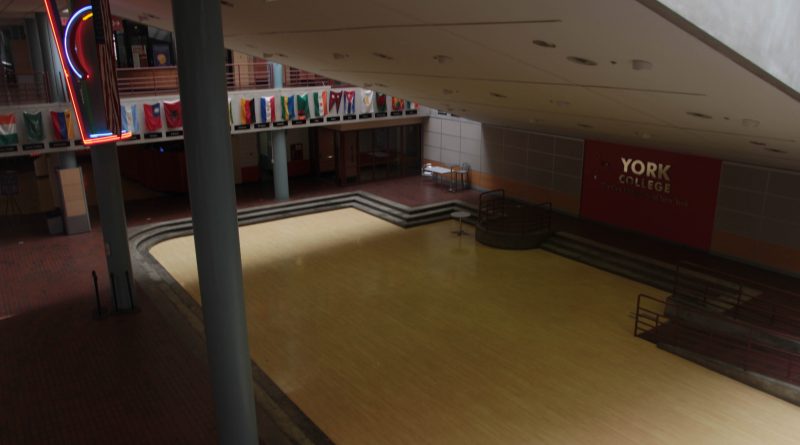 York’s Atrium in the Academic Core Building, which would usually be packed with students signing up for clubs around this time of the year at the Club Fair | Photo by Parsram Stanley

With almost all York students at home and no club activities taking place on campus, club leaders are in a tough spot and have to be creative in formulating alternative ways in running their clubs through virtual means.

Some clubs have dedicated teams who have been able to seamlessly transition into remote communication. However, there are others that rely solely on in-person interaction and teamwork for success.

“Even though everything is online and it’s easier to get in touch with people, if you don’t have their contact information of course it’s incredibly difficult,” said Honors Club President Courtney Desinor. “Especially having to conduct a club meeting.”

While different clubs face different challenges, there is one thing they will all suffer from by the lack of on-campus interaction this semester.

“I think the biggest difficulty this semester would definitely be recruiting–letting students know that we’re here,” said Pre-Med Club Vice President Judder Garcon. “Our biggest numbers came through the club fair and social interactions between students telling their friends about the Pre-Med Club.”

The lack of efficient recruitment this semester is the downside for clubs on campus. Even though there will be a virtual club fair on October 1, the advertising for it will rely on students to look out for fliers posted on the YC Cardinal App and any other communication via word of mouth. This is opposed to previous years where there were physical fliers posted all around campus for everyone to see.

This leaves interactions with students at the fair to be quite different as well. According to SGA Club Council President Laura Dehkanov, club leaders will log in to a Zoom call to present their clubs and what they entail.

“The Zoom is just for speakers and it will be played live for everyone to access through the college website via YouTube,” said Dehkanov. “People can post questions right on and we will get it in the Zoom call for clubs to answer.”

Since drastic changes had to be made in day-to-day operations with the closures of CUNY campus across the city last March. It has been proven difficult to keep members engaged.

“I think the biggest concern we have for the club right now is accountability,” said Desnoir. “It’s so much easier to say, ‘Hey, can you guys stop by the office.’ I see them, and we have that understanding of okay, this is what’s necessary or this is the new news or this is a new opportunity coming up.”

Desnoir added that communication via email is difficult for various reasons, from the interpretation of the email to whether people choose to respond or not.

“When it’s via email, they are already getting so many emails every day from their professors, so I sometimes feel like it may get lost in those emails,” said Desnoir. “So, when they get a notification from Outlook they don’t even look. Eventually, they might get it but it doesn’t have the same impact.”