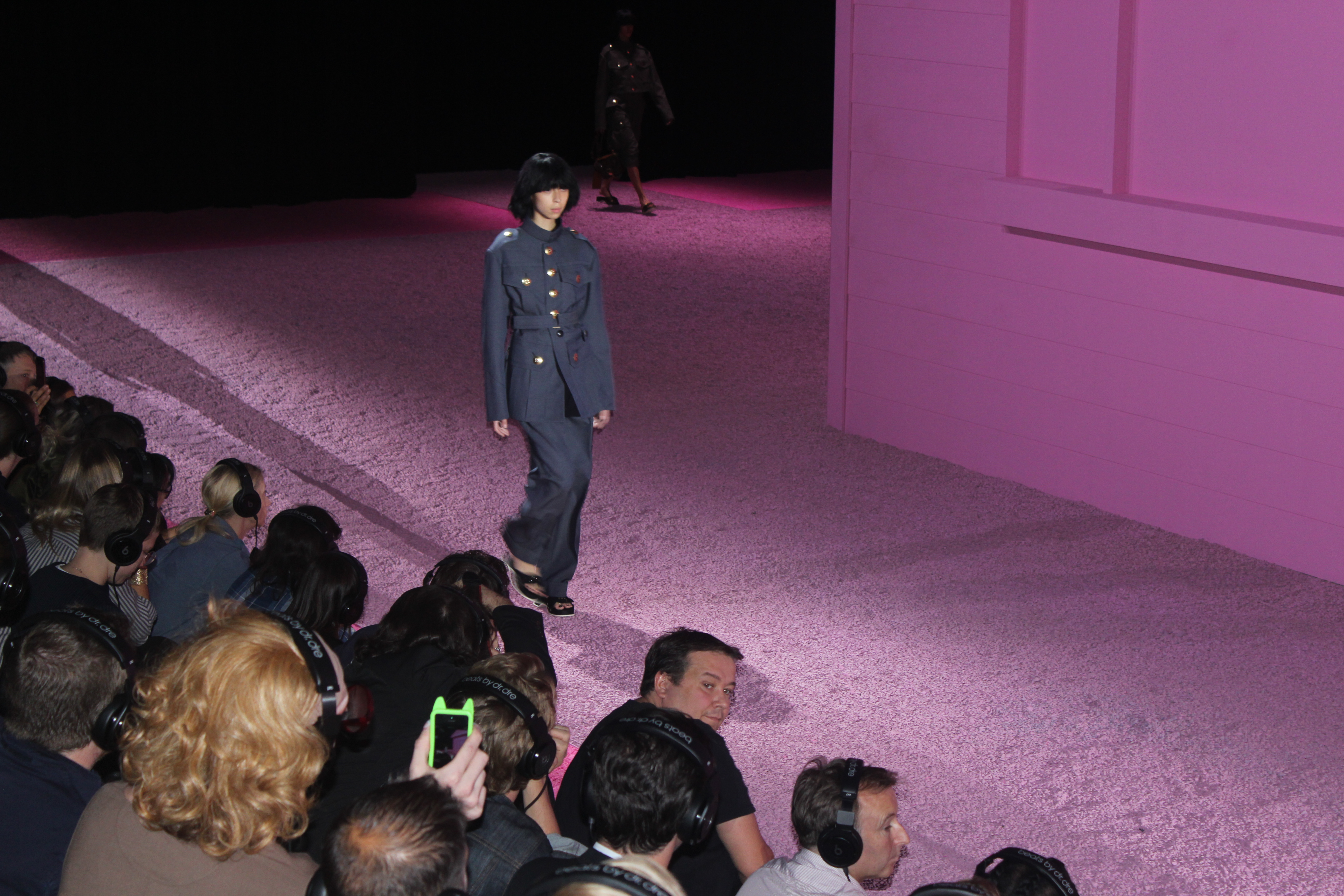 Known for his over the top shows, Marc Jacobs delivered a sensational finale for New York Fashion Week. Anticipation filled the air as celebrities and fashion enthusiasts surrounded a pink house within the Park Avenue Armory. Influential stylists the likes of Miss J and Martha Stewart sat front row. As guests settled down, they were instructed to wear designated “Beats by Dr. Dre,” and listen to a pre-recorded track of military marches.

The showcase was for the Spring 2015 collection, which consisted of military fatigue-styled dresses and uniformed dresses. Olive greens filled the runway followed later by beige, gray, navy and silver hues, giving a sneak peek into 2015 fashion trends.

As in true Marc Jacobs appeal, all the models wore  similar shaggy black wigs matched with pale nude makeup, hiding many A-list top models behind the facade of uniformity Kendall Jenner, for example, sister of the Kardashian family, made her Mark Jacobs debut as she cat-walked along side Candice Swanepoel, Adriana Lima, and Karlie Kloss.

Dresses with open backs and oversized buttons were the essence of the show. Alligator, suede, and military material were the must have bags for next season.

Chirping birds cued the closing moments of the show as every model walked for the last time that evening. Designer Marc Jacobs came out, and with a call to Old New York, pushed a cigarette in his mouth and bowed to his audience. Deafening claps filled the room as the “King of Fashion” presented himself.

But what happens before the glamour is exposed? How did the pink house come about? What about the track? As expected, quite a lot of work goes into the planning of a show like this. From the start, this event was all about the set built just for the event.

Intern  Rome, Italy was one of the many who worked on creating the scene for the show. Before that evening, she spent day and night with production.

“It was intense, ” DeAglio said. “For the last month, I ran around for days. These last two weeks, I worked from 9 a.m. to 10 p.m. There was so much to do. We had to pick a pink for the house, the headphones, find the carpet, build the house. And in the meantime, run around the city from end to end.”

Even the day of the show, the 21 year old couldn’t call it a day. “We came early to set. I have been here for four hours and counting. But look at how everything came out.”

The pink house was the pop of color that helped the darker tones of the clothing stand out. The most confusing part of the show was the pre-recorded track. DeAglio commented stating that, “It was intentional. ‘Make it monotone almost robot like.’ Marc told us. It was meant to go with the theme. You have these beautiful military influenced pieces, why not create a contrasted recording with chirping and a monotone voice? It’s ingenious.”

While some may still be a bit taken back by the recording, every small element of the show made for a spectacular finale. Endless hours at work setting up and then taking down the show were just as important. With a pattern to intentionally leave his audience in a confused and admirable state, Marc Jacobs wraps up New York Fashion Week in a unique pretty pink house all his company’s own.