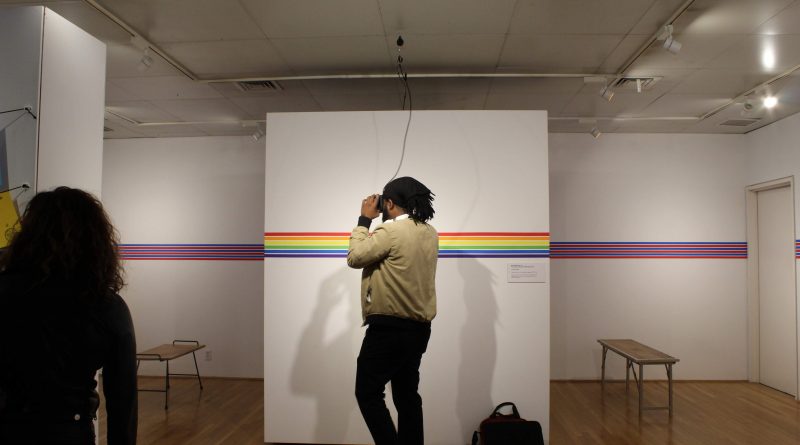 The Fine Arts Gallery at York College, in collaboration with Future American Retrospective, opened to the public a new interactive and 360 degree art exhibit titled LGBTQ+ in Queens.

The Future American Retrospective, which is a project started by associate professor of communications technology, Daniel Phelps, aims to record oral histories for a short period of time. He says that some of the topics discussed in the exhibit are hyper-local and/or hyper-timely.

“The show showcases an LGBTQ+ symposium we did in the spring and it showcases just that because we collected so much data, interviewing 28 people in virtual reality and high quality audio.”

The exhibit focuses on the history and hardships of the LGBTQ+ community in Queens.

“Choosing LGBTQ+ culture for the project had to do with looking at Queens and some of the struggles that a very small community has had in Queens over the past 40 to 50 years, or even longer than that,” said Phelps.

Many of these struggles include those of Irish-born gay rights activist Brendan Fay.

Fay, who spoke at the exhibit on April 17, spoke about his experience fighting for LGBTQ+ equality. One part of Fay’s experience was his termination at an all girls’ catholic school, that used to be not that far from the York campus.

“I still think back to the actual moment,”, said Fay. “It reminded me of the prejudice that LGBTQ+ people still experience, where we are told we are not welcome, we have to hide ourselves, not be ourselves.”

Fay has been involved in several LGBTQ+ movements in Queens and around the city. He was also responsible for organizing groups like the Irish Lesbian Gay Organization (ILGO) and the Lavender and Green Alliance.

Phelps believes that Queens is overlooked in LGBTQ+ culture and wanted to showcase the credit it the borough deserves.

“Manhattan has gotten a lot of the spotlight, but to really look at Queens and to view the historical artifacts we have including photos, interviews and Councilman Daniel Dromm who started the Queens Pride Parade; that did not get as much national attention as Manhattan did,” said Phelps.

Councilman Daniel Dromm, who serves city council District 25, was also in attendance during Fay’s talk and spoke briefly at the beginning about his experience as a gay rights activists and how he came out in 1992 while he was working as a school teacher.

“I think it is really important that we show LGBT lives and how they live and survive in this borough,” says Dromm. “Being out and visible and having an exhibit like this is important.”

Dromm says that since he came out in 1992, things have changed dramatically because of the LGBTQ+ community’s willingness to be more visible.

“Things have changed and a lot of it is because of our visibility, so I think it is important that people know we are your family, friends, neighbors and so on and so forth,” said Dromm. “When people know that, I think it is less likely people will discriminate against us.”

The exhibit features different methods of immersive video technology, such as Virtual Reality and 360° video formats.

“This show explores the different ways to view immersive video,” says Phelps. “It is taking those formats that we use to acquire images and playing them back in different ways.”

This allows viewers to choose exactly what they want to see in a certain part of the exhibit.

“I want them to have a different experience every time they walk in,” says Phelps.

One part of the exhibit features four television screens, each showing a different angle of last years LGBTQ Symposium.

“As humans we have eyes that point forward, but if we hear something behind us, and there’s different images behind us we are going to choose our own narrative. The narrative is the story that is being told.”

One part of the exhibit, called “Little Big Planet”, is composed of two pieces that uses high quality video, and goes about in a way where virtual reality goggles are not needed. This is opposed to a piece that lives in the center of the exhibit, which are VR goggles mounted to the ceiling. However, the VR goggles do not come with the same sort of experience as the other pieces.

“One person is experiencing that,” Phelps says, in reference to the goggles. “I wanted to explore what the options were because I think VR goggles is a very limited experience.”

Although the project will wrap up at York on April 26, Daniel Phelps hopes it will travel outside of the campus.

“Larger projects like this take time to create, evolve and figure out what you are actually trying to do,” says Phelps.

He also mentioned that the Queens Public Library has already expressed interest in hosting projects and exhibits similar to this one.

“I have been shooting immersive video with them about gentrification, land use, and what the past present and future looks like,” said Phelps. “As an artist you do not create art just for one small event and one group of people, you create it for everyone and hope that everyone is influenced by it.”