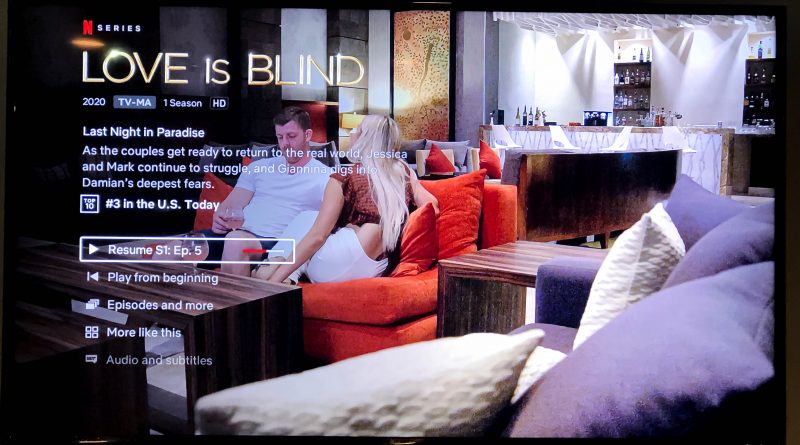 Reality television has become one of the most popular genres of shows this past year. Netflix, in particular, has sprung up with countless additions on their network including shows like Bachelor, Dating Around, Queer Eye, The Circle and now the most popular one, Love Is Blind. Many news outlets critique television networks like Netflix for this, saying that the shows are shallow and unrealistic despite it being “reality”. Regardless of the hate, Netflix has climaxed in views and many people tune in daily to catch up on these not so realistic reality shows.

Love Is Blind was just recently rated the number one show in the USA. The cast has been featured on popular talk shows like The Ellen Degeneres Show. It’s filled with motions, fantasy, and real-life scenarios.

The couples meet each other through a walled room called “the pod” where they interact without seeing each other. The concept was developed as an experiment to understand whether the theory ‘love is blind’ is actually true. This theory means that true love should not develop through physical attraction but through a mental and emotional one. The couples stay in a secluded housing area separating male from female where they are cut off from the outside world without their phones, TV, or contact with friends or family.

Within a matter of days, many of them fall in love and are able to meet and then given 30 days to get married. Sounds unrealistic, right? The show has given its audience a new way of seeing love and life through merely a mental connection. After seeing their partners face to face, the couples realize the challenges they may ultimately face in the real world with age, race, sexuality, and background playing a factor. Not only do these challenges arise but so do the aspects of opinions from social media, family, and friends that show in our society, looks really do matter.

The show’s contradictory aspect also plays out when you realize all the contestants are quite good looking making it that much easier for them when they meet face to face. In spite of the show’s unethical and immoral twists and turns, the world is watching and they are addicted. If you are in for a revolting and dramatic TV show, then you may be one of those people who may be intrigued and addicted to Love Is Blind and the show’s concept of how people can fall in love.