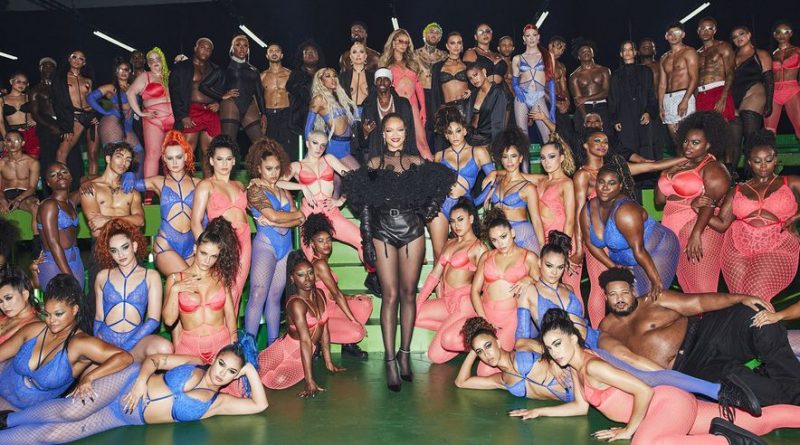 Rihanna’s sultry lingerie brand Savage X Fenty was introduced to us in the year 2018. The following year, September 2019 to be exact, the lingerie brand debuted in Brooklyn’s Barclays Center for the New York Fashion Week event, which later appeared on Amazon Prime Video.

The brand announced on all social media platforms with a video teaser, and a caption that read: “Y’ALL NOT READY” . Where Rihanna appears wearing a mask and a visor as she walks behind-the-scenes of the show with glimpses of models wearing Fenty lingerie.

Despite the challenges of COVID -19 Rihanna and her team made the show possible. According to CBS News, Rihanna had high hopes that her fashion line would provide “a little bit of happiness” because “there’s a lot going on in the world right now.”

According to Harper’s Bazaar, Rihanna said producing a runway show during a pandemic was the ultimate creative challenge. Although, the stage presentation is enough to make others forget this was produced during a global pandemic.

“It was a completely different process this year. We had to work around the challenges of COVID-19, keeping everyone safe and their health at the top of our list,” Rihanna told the outlet. “It forced us to figure out new ways to produce a show. We had to figure out ways to make this feel as visually enthusiastic as possible. I’m excited, and I’m proud of my team—we pulled it off.”

COVID-19 hasn’t made it easy for anyone. However, Rihanna didn’t let this discourage her.

Rihanna told Vogue  “I want to have my hands physically on everything, and now it’s all being sent by email, pictures, and video, so it’s different,” she says of the shift to digital. “It’s kind of annoying for a control freak like me!” Whereas the planning for last year’s event was handled in person, this time around all pre production took place via Zoom and FaceTime. “Whether it was rehearsals or meetings for the creative, dancers, and models, everything had to be done virtually,” she says. “There are a lot of moving parts, and we wanted to make sure everyone was healthy first and foremost. With the global pandemic, it’s tough, but we’re tough cookies, and we love a challenge!”

There are new designs and some pieces have Rihanna’s handwriting. Savage X Fenty now includes a mens line,  that was designed by Christian Combs.

Fenty’s label is most notable for its striking designs and its diverse line up of models. She, unlike many, celebrates different body types and individualities. Fenty states she will be promoting in the show faces and figures that will reflect the reality of the world we live in, Rihanna told People Magazine, “Inclusivity has always been a part of our brand. That’s not a ‘right now’ thing. It’s sad that it’s right now for most brands. But that’s always been who I am. It’s always been how I operate with everything I’ve done creatively, whether it’s makeup or lingerie,” Rihanna said. “I get really excited to see people be a part of my brand. It’s not like I went into it thinking, ‘Let’s make a movement.’ I feel great that there are women that are feeling like they see themselves on the stage for the first time. And if we can continue to expand on that, we’ve done more than we really started out trying to do.”

Her show features a range of models and performers, including some who have starred in her show before and others who haven’t. Returning faces include Singer Normani and models Paloma Elsesser, Bella Hadid, and Cara Delevingne. Those who are making their debut are actors Demi Moore and Laura Harrier, musicians Lizzo and Willow Smith, and Ru Paul’s Drag Race stars Jaida Essence Hall, and lastly Shea Couleé. Several artists performed throughout the event. The lineup included Miguel, Travis Scott, Bad Bunny, Ella Mai, and more.

You can shop Savage X Fenty’s Fall 2020 collection in Amazon’s fashion store as well as the original website with all sizes ranging from 30A-42H/46DDD and XS-3X.

WHERE CAN YOU FIND THE FIRST SHOW?

Savage X Fenty Vol. 1, runway debut is unlike any other lingerie show, it shook the fashion industry. It was the first to combine a runway show with live performances. It received an Emmy nomination in 2020 for outstanding choreography for variety or reality programming, according to CBS News. It challenged standards and gave the world a new outlook on beauty. If you have not watched it, It too can be found on Amazon Prime Video. You can’t watch the second show without seeing the first.