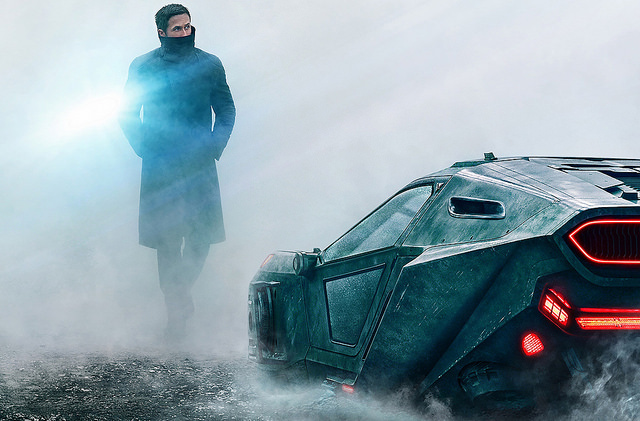 Blade Runner 2049 staring Ryan Gosling may have been slow paced in some scenes but made for a visually appealing film. Photo Credit: Ron Frazier

Blade Runner, first premiered in 1982 and its sequel, Blade Runner 2049, premiered this year in 2017. Both movies are strikingly similar; however, you don’t have to watch the first one to understand or enjoy the sequel.

Blade Runner 2049, takes place thirty years after the first Blade Runner. The film is about a bioengineered man named Officer K (played by Ryan Gosling) who is a newer model of a “Blade Runner,” or slave robots who obey any and all human commands. K’s job is to kill older models who disobey and try to lead lives of their own in disguise as normal humans. His job as a slave robot for the LAPD soon takes him on a mission to kill a rogue robot. It is there that he finds the remains of a bioengineered woman who has had a caesarian section.

K’s discovery of the caesarian section shakes him up, as he originally thinks that cyborgs can’t produce children. He is then ordered by his Lieutenant (played by Robin Wright) to find who the child is and kill it because she believes that if all cyborgs or replicants (robots) find out that they can reproduce, it would only lead to a terrible war.

Blade Runner 2049, takes on a story of its own and does it in a way where younger audiences can connect to its franchise. One element that drew younger audiences to the new film but old franchise, was having Ryan Gosling play the protagonist. Ryan Gosling is now a pop culture icon, appearing in many well received movies like The Place Beyond the Pines, Gangster Squad, La La Land, and many more films that have recently been made.

Harrison Ford also makes an appearance as his old character, Rick Deckard, in the middle of the movie. But he doesn’t really play a very important role until the end. Harrison Ford and Ryan Gosling together in this movie bring both old and young audiences together.

While it is a blockbuster film, it plays out much like an indie-film. In the film awkward pauses in scenes are filled with silence rather than background music. It’s a very artsy film and sometimes drags on because of this fact. For example there are some scenes in the movie where more storytelling could have fit in, but instead the audience gets a whole two to three minute shots of just the world they are in, or characters are just standing and thinking. These shots do make for visually stunning scenes.

Blade Runner 2049, is not only a visual masterpiece, but it’s a story that makes the audience think about what kind of future we might be heading in. It shows us how we can advance through technology, but also how much humanity we can lose because of these advances.

In one scene, K has a girlfriend, but his girlfriend is a hologram who after upgrading, feels more real to him. Since K doesn’t have a real name besides “K,” his girlfriend decides to call him “Joe,” which makes him feel special. He later sees a hologram that is identical to his girlfriend and that hologram also calls him “Joe,” he realizes at that moment that the program calls every person who uses it “Joe.”

Small scenes like these are especially powerful, because they show how technology is making us less social. We are relying on technology so much that soon we might rely on it for companionship. We are already in some small ways relying on it for companionship, since we have apps that allow us to talk to robots who can talk back. Technology connects us and makes us feel closer to one another, but really we are losing the ability to talk to each other and form strong relationships.

While we don’t have hologram girlfriends or boyfriends yet, we do have “Roxxxy” the sex robot, who has artificial intelligence that simulates real conversations, among other things it can do. Blade Runner 2049 gets us to sit and think about what future we might have if we continue to progress with artificial intelligence and technology in general, more so, what might happen to the world, how we interact with the world around us, and how we may be soon forming relationships with things that aren’t really alive.

There are talks of a third instalment in the franchise, but it is not confirmed yet. Blade Runner 2049 is a powerful and brilliant film, and I hope there is a third coming in a few years. Until then, I will have to watch this movie again and again, and again.