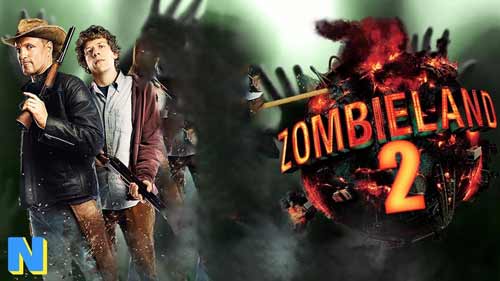 If you are a fan of the original film, then there are no doubts that you already saw Double Tap, and you probably enjoyed it.

The film that tries to be more Shaun of the Dead than The Walking Dead made a lot of promises. It promised more of the same humor and chemistry while adding a brand new storyline and a plethora of new cast members.

This is a new direction for the franchise, considering that the first film only featured one character (Bill Murray) other than the main core.

This time around, the group realizes that the zombies that infested their world have been becoming more advanced and it is becoming more difficult to stay alive. There is also a ton of romance tension within the group, which leads to a small fallout between the members and one of them running away.

Most of the film revolves around the three remaining group members trying to track down their friend while battling zombies, making new friends, and trying on authentic Elvis Presley shoes.

The film’s humor was right in line with that of its predecessor and featured more pop culture references than you can think of, which included Elvis Presley, Terminator, Jurassic Park, The Simpsons, and Lord of the Rings.

One of the best parts of the film is the chemistry between Harrelson and Eisenberg. The two really know how to make a scene work and how to bounce their lines off of each other.

Every scene that has the two of them interacting is very much like watching Holmes and Watson, Chandler and Joey, J.D. and Turk, or Steve and Dustin.

There are some times where the film seems to drag on a bit; where it reaches the point where you think it will be a good ending, and then it turns out to be so much more. But that also means more comedy. So, while the story could have been written a bit better, it is still just as good near the end as the rest of the film.

Overall, it’s a great film but does not match up to the original and overall is going to get an eight out of 10.