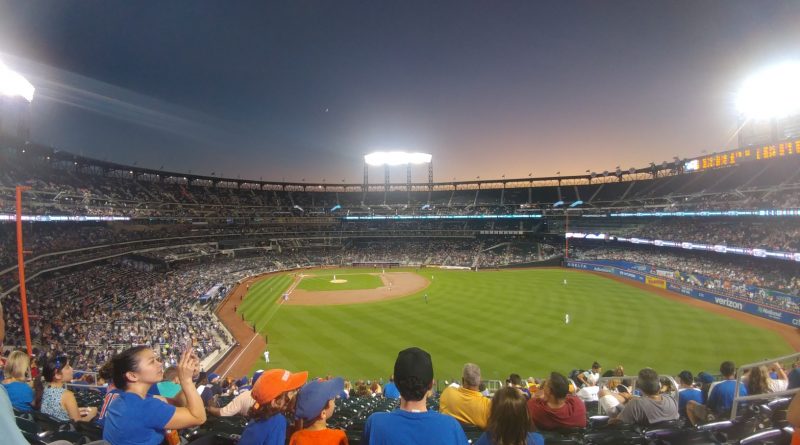 David Wright made his way to Citi Field early Saturday morning on Sept. 29 ready to play baseball. When he arrived, there were already thousands of fans waiting in line to get into Citi Field. They weren’t really there for the game, just to see him because it was going to be his last game.

In the middle of September, Wright announced that Sept. 29 was going to be his last game. He hasn’t played in a game since 2016 because of injuries and realized that he was not going to play baseball again, but he wanted to come back for one last hurrah after spending nearly two decades with the New York Mets.

When it was time for the game to begin and the announcer mentioned Wright’s name in the lineup, he paused for about 30 seconds to allow the more than 40,000 fans in attendance to stand and cheer for their captain.

The same thing happened when he had his first at-bat. and while he didn’t get a hit, he did get on base. He did have one more at-bat during the game, but it didn’t go as well as anyone could have hoped for.

Nothing could prepare mets fans for how emotional the top of the 5th inning would be. Wright took the field and as a joke, the scoreboard operator put both Wright and teammate Jose Reyes on the kiss cam.

The two of them hugged and then Wright slowly began to walk off the field. The entire team then stepped out of the dugout and he spent five minutes hugging every other player and coach before disappearing into the clubhouse.

He didn’t really leave, it was all just for show. The plan was for Wright to come back out after the game for a final tribute and speech. But, as the game went on, fans began to fear that the moment would never come.

That’s because the game never seemed to end, after nine innings neither team had scored. The game stayed scoreless until the bottom of the 13th inning, where mid-season pickup Austin Jackson won the game for the Mets. The game lasted four hours and 14 minutes and the official attendance was just shy of 44,000.

Following the game, a short video was shown that detailed Wright’s career and love for the game before he came back on the field for one final speech. His speech lasted three minutes and was full of emotion.

“This is love, I mean, I can’t say anything else, this is love,” he said, opening his speech to the 40,000 fans still in attendance. He began his speech by getting right to the point of what it meant to be surrounded by fans who love him.

He also went on to talk about what it was like coming up to the Mets as a rookie back in 2004, “When I first got called up, all the other players told me that there’s passionate fans here, they like to boo, they like to get on you. Well you guys have had my back, and you guys have welcomed me, a 21 year old kid from Virginia, as a New Yorker.”

After his speech, the now 35-year old Wright listened to thunderous applause before walking off the field one last time.

After the post-game ceremony concluded, the fun wasn’t over yet. Fans were then treated to a fireworks display that could even rival that of the Macy’s 4th of July special.

The fireworks weren’t even a part of the celebration. It was a coincidence that he played his final game during one of the fireworks nights that were planned months in advance. It only made the experience so much better.

The display itself was spectacular. Usually fireworks at Citi Field are simple, lighting up around the stadium with some music. This time it was different. The 10 minute display launched fireworks from both the stadium and the field along with an intense laser show while in synch to different songs.

Everybody is going to remember Wright, but even though he may never play again, Mets fans will have something to remind them of David for years to come. This comes in the form of Peter O’brien, the Marlins first baseman.

During Wright’s speech, he mentioned booing. While he was never on the receiving end of fan criticism, Mets fans let O’brien know how much they hate him. During Wright’s final at-bat, he hit a high fly ball that went into foul territory and O’brien caught it.

It was a grave mistake on his part as every fan in attendance booed and they continued to do so each time that he came to the plate. Back in 2015, Chase Utley of the Dodgers slid into Mets shortstop Ruben Tejeda and broke his leg. He instantly became the most hated player in all of baseball by Mets fans.

He was constantly booed at every instance until his retirement this year. The 28-year-old O’brien, who will play at Citi Field up to nine times a year if he stays with the Marlins will most likely face the same fate for years to come.

In a few years, fans might not even care anymore, but a universal hatred of O’brien will be a way for fans to stay connected to Wright, one of the best players in New York history.

One thought on “David Does Final Game The Wright Way”