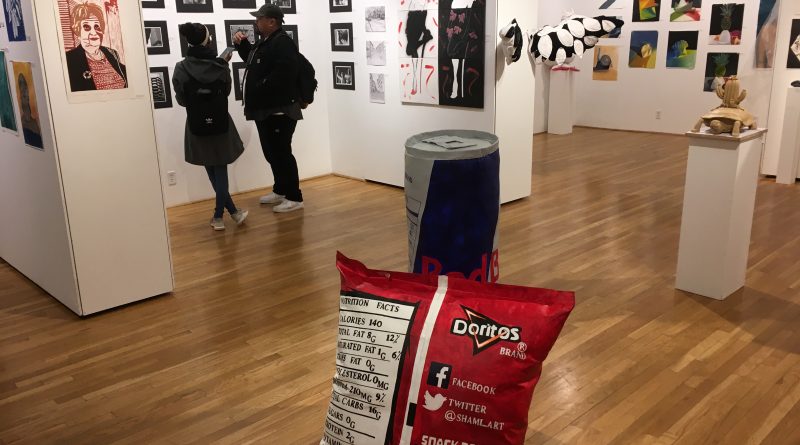 Selected students of all majors exhibited their artwork in the art gallery on May 14, right before the 2019 York College Arts Festival.

According to Margaret Vendryes, Fine Arts department chairperson, the artwork exhibited is chosen by five full-time Fine Arts faculty members. The jury chooses from a pool of art collected by professors throughout the semester, from art classes like photography, graphic design, advanced painting and sculpting.

The artwork is then chosen “based on the quality of all the artwork submitted and the space available for display,” said Vendryes.

“As chairperson of the department, an art historian, and a visual artist, I am always impressed by the work our student artists create in only 14 weeks of studio time,” said Vendryes. “The provocative themes and craftsmanship are a true sign of the value of visual art in a Liberal Arts education.”

Two York students: Francis Carrillo and Joseph Macasaet were proud to see their artworks displayed in the gallery.

Carrillo, a junior Accounting major at York,  took Fine Arts 381, an introduction to film photography class, as an elective. Her two artworks are themed as the “Two Different Sides of New York City”. She took pictures of the Vessel at the Hudson Yards which opened on March 15, 2019 and stated that it had an interesting “architectural side.” As for her second art piece, she took a picture at an art-scrap yard. She said that the photo is meant to have an “artsy-grungy side.”

“The project took two weeks to complete but the process of developing the pictures took about 30 minutes,” Carrillo said.

She was surprised to see her artwork being displayed. Especially since she is not a Fine Arts major and this was her first time taking a photography class. Nevertheless, she is satisfied to see her hard work pay off.

Carrillo shared that her favorite experience in photography was the process of developing pictures.

“It’s pretty cool itself because when you put the picture in water in a dark room, the picture comes to life! So, it’s pretty interesting” Carrillo said.

Joseph Macasaet, a senior Accounting major, had two of his photos taken for his Photography II class displayed on the gallery. The two pictures displayed are ones he took of the side of the Vessel at Hudson Yards and a billboard that says “LONG ISLAND” in grayscale.

He claimed that he likes certain perspectives of art where people would pass by a sculpture and see it in a different way than being in front of it. So he decided to take a picture of the side of the Vessel.

“Art is looking at things in an obscure way to get different views of it,” said Macasaet. “So, when I took the picture the lines really intrigued me and honestly, I am so happy the way it came out.”

Macasaet’s said he was surprised to see so many of his photos being displayed in the gallery.

“I know there are students in my class that major in Fine Arts and to do something like this as an accounting major, I was very grateful that Professor Jennifer Formica saw that my art has potential to be displayed with all of the amazing artworks here,” said Macasaet.

The process of taking at least “one perfect shot” and developing the pictures from the negative films to the actual print took him 2-4 class days to get prefect.

Macasaet mentioned that while he always had an interest in photography, before taking the photography class this semester he had never owned a camera and would typically just take pictures on his phone.

“All of the art pieces in here looks beautiful- art is a form of expression and you get to look at things in a certain perspective,” said Macasaet. “I get to show people the way I look at things just by taking pictures but art is subjective because art could mean anything to people.”

One piece that caught Carrillo’s eye in the gallery was “Casa #404” by Paloma Sentano, which showcases a timeline of photos about a family from the Dominican Republic with a narration written across it in Spanish.

The art exhibit will remain on display in the Fine Arts Gallery until June 7.