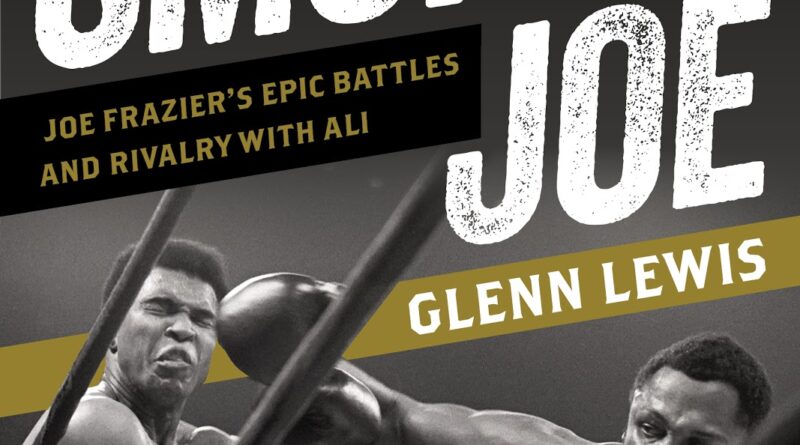 If you want to ignite a passionate argument between seasoned boxing fans, you may want to mention Muhammad Ali and Joe Frazier’s second fight in 1974, and also throw York College Professor Glenn Lewis into the heat as well.

Lewis, journalism professor and director of the Journalism program, recently published Sparring with Smokin’ Joe: Joe Frazier’s Epic Battles and Rivalry with Ali, a biography detailing the rivalry between Frazier and Ali and Frazier’s spirit both inside and out of the ring. The newly released book opened as the #1 Bestseller New Arrival on Amazon for Boxing Biographies and for the Boxing Books category.

Its publication comes just in time for the 50th anniversary of the rivals’ first fight on March 8, 1971, commonly known as “The Fight of the Century.” Throughout the book, Lewis argues why Frazier should have been declared the winner in Ali and Frazier’s second match in 1974 and why Frazier was really the one who deserved the title of “The Greatest.”

The book has its origins in extensive research of the rivalry and a four-month piece series of interviews in 1980. Lewis conducted with Frazier for an Esquire article that appeared in Sports Illustrated magazine. In a recent interview with Pandora’s Box, Lewis mentioned why this fight was so important to focus on in the book when discussing the rivalry.

“Infrequently, Joe got the chance to talk about his side of the rivalry,” said Lewis. “The rivalry between Joe Frazier and Muhammad Ali, according to dozens of newspapers and websites who visited the idea a few years ago, by far it’s the most popular and most greatest rivalry in the history of boxing. Literally, their rivalry divided the whole world.”

Lewis said it was pretty clear cut as to whose side you were rooting for, whether it was Ali or Frazier, noting that it was all dependent on the way Ali “set up” the fight. He mentions that Ali used his return to boxing in the years following his dilemma of appealing charges against him for dodging the Vietnam War draft, to create an image for himself as the “black man’s champion” while preaching that Frazier was fighting for white people.

“He was saying that Joe was really just a stooge for the establishment, and that Ali was anti-establishment,” said Lewis, noting that this was the time of the Vietnam War and the protests against it. “So basically anyone who was ‘draft age’ at the time idolized Ali because he was talking for everybody, against what we all considered was a bad war.”

Diving more into Smokin’ Joe’s background, Lewis learned that from following him on the road in his life after boxing in 1980, that Frazier wasn’t what Ali painted him to be. Lewis touches upon an instance mentioned in the book where Frazier is invited to speak to a club owner about he and his band playing at an aristocratic, mostly white club in Augusta, GA.

“The guy who owns this club is thrilled that Joe’s there, talks about all of his fights and is obviously a big fan,” said Lewis. “So that’s great, but on the other hand, the thing that sort of surprises me is that he keeps calling Joe, ‘boy’. Even in 1980 that’s unheard of, and I kept waiting for Joe to get angry and basically knock him out and even I wanted to.”

Lewis said that during the conversation with the white club owner, they settled a deal and Frazier agreed to his request, without ever mentioning the racial slur, “boy.” Lewis asked Frazier why he did not confront him about something that seemed so obvious.

“He says to me, ‘You don’t get it do you?” said Lewis, who was then told by Frazier that the owner’s communication with him is just part of the way he was raised. “He’s not trying to be insulting, it’s just his way of talking, it’s his upbringing.”

Lewis then asked Frazier what the situation would have been like if it happened in a northern city like New York or Philadelphia, with Frazier replying “I would’ve knocked the guy out, because they know better.” Another instance occurred where Frazier is invited to talk about black economic power, but denies to be a mouthpiece for this, because he refused to tell people how to think. After this, Lewis said he later realized that Joe was political in a way he chose to be and what was comfortable for him.

“He was never going to be Ali, he was never that blip, and he took things sometimes more seriously than Ali did,” said Lewis. “It made me realize that different people have different ways of showing what’s important.”

Aside from the aspect that Ali’s own personality stirred conflict between the two, Lewis believes the rivalry had many other driving forces, especially the fact that at the time, both men were undefeated heavyweight boxing champions entering the ring together for the first time.

“You have to remember, Ali never lost his title to anyone, he was just banished from boxing for a few years because of non-boxing problems,” said Lewis. “The other thing was, when Ali left boxing in 1967, he was really admired, undefeated and so many people came to watch boxing simply because of Ali. Ali was so entertaining, funny, cool and moved so well in the ring.”

Lewis said that thousands more fans came to see Ali when he returned to boxing, not because they were boxing fans but because they were Ali fans. When Frazier defeated Ali in the Fight of the Century, people were surprised, according to Lewis.

“Joe really beat Ali up in that fight; it was startling to people,” said Lewis. “It was the first time Ali had ever lost, he had won a couple of big fights after he came back before this fight and a lot of people thought he was invincible. The way Joe beat him was so convincing; it was so stunning. That’s why there was so much interest in the second fight.”

In the section of his book where Lewis discusses the rivals’ second fight in 1974, he argues that Frazier should have been declared victorious.

“One of the things I talk about in the book is that, maybe the unconscious desire to have Ali win might have affected some of the story in that fight because they have Ali winning a close unanimous decision,” said Lewis. “Joe always kept saying to me, ‘I was robbed, I won that second fight.’”

During the process of writing the book, Lewis reviewed videos of the fight and rescored it round by round. In the way he analyzed it, Frazier won seven rounds to four, with one round where he and Ali tied. To support his argument, Lewis mentioned two 1970s sports’ writers opinions who also thought Smokin’ Joe was the true winner.

“That’s another thing that I think is interesting that came out of this book, said Lewis. “What would have happened to both of their legacies and the way both are rated as fighters if Ali had lost those first two fights? I doubt if he lost that fight he would’ve been considered the greatest.”

To discover more about the epic rivalry and Lewis’ time with Smokin’ Joe, a Feb. 16 book talk hosted by York College and moderated by Professor Emeritus, James Como is available to stream on the York College Youtube site. You can order Sparring with Smokin’ Joe: Joe Frazier’s Epic Battles and Rivalry with Ali, through Amazon and Target for $22.49, and also to download as an ebook from Barnes & Noble for $23.50.