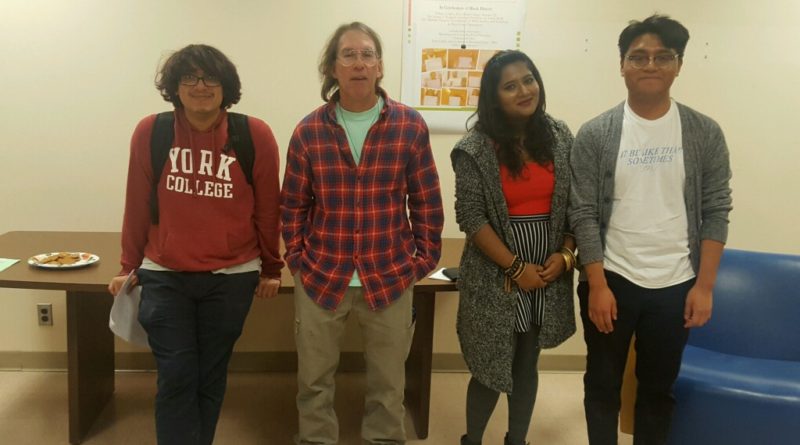 By: Tylaisha Davis and Anthony Medina

Papa decided to host this event in the African-American Resource Center to create an artistic and creative environment. Heather Robinson, Chair of the English Department, joined the audience with professors Jonathan Hall, Phebe Kirkham, and Nathan Austin.

Jabari Bruce, a journalism major in Papa’s Advanced Poetry Writing Workshop, recited his poem reflecting his experiences as an black male. Bruce decided to recite one of his poems to the class indifferent to three other students choose.

“I wrote poems before, the poem I said today was from like a year ago. I have short poems also,” said Bruce. “Because I’m black, I should be speaking a certain way. I shouldn’t speak in a full grammatical sentences and speak correctly. It’s basically telling people that it’s just ignorance, it doesn’t matter; you could do what you want to do with however you talk. Don’t feed into the ignorance because you talk a certain way.”

“Jay Z’s Song uses two 22 times,” said Gomez. “I flipped Jeffrey McDaniel’s song and structured it in a way of what happens when love doesn’t work out.”

Cesar Ventura, a junior and English Literature major, recited a poem unique to his experiences titled Living in a Basement Apartment. A fire in his apartment building in Brooklyn forced his family to move to Queens where they were forced to re-adjust.

“I’ve been living in the same apartment in queens for more than half of my life,” said Ventura. “Probably 15 years, during those years I have had a bunch of experience from child’s play to what my mother did for me, to tragic life events.”

Professor Papa has contributed to the Annual Poetry Reading annually since around 1966 with all types of readers. This year’s reading stood out from the rest because students were highlighted as the main poets. Papa told Pandora’s Box that he’s satisfied with the students hard work.

Leave a Reply to A former student Cancel reply