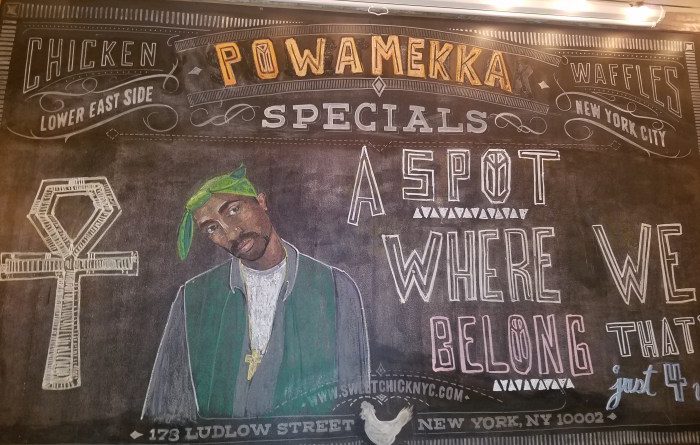 Powamekka Cafe is what rapper Tupac Shakur considered a, “down-home Southern” restaurant, in the notes that he made in his journal before dying more than 20 years ago in 1996.

“The perfect hideout 4 those who wish 2 escape the worldz cold reality,” are what he wrote in his notes next to the sketches of the restaurant he believed would one day become a place of refuge for his friends.

Sweet Chick, a New York City based Southern-style restaurant known primarily for their famous chicken and waffles, embodied Powamekka Cafe and based it on the culinary ideas of the deceased rapper for only one weekend.

“The food was good,” said 31 year-old Sarah Anderson from Harlem, as she finished the chicken and waffles she ordered for dinner. “I’ve been to Sweet Chick before and it had that Sweet Chick vibe but just with a Tupac-style. It’s very dope to see the menu written in his style of writing and to see what ideas he had before his passing. It’s nice to see someone took the time and bought his idea to life.”

The Tupac-inspired menu featured gumbo, meatloaf, his cousin Jamala’s famous chicken wings, and 16 other items in total including dessert which showcased his love for Southern Cuisine.

“They don’t normally have peach cobbler here so it was cool to be able to get that being from the South originally,” said Young. “It makes me think about how connected Tupac was to the South because the food choices were really Southern and the food here was really good, I enjoyed it.”

A collection of Tupac’s childhood photos, memorabilia, and personal poetry were on display and placed in a way to make you feel as if you were in Tupac’s home yourself. Fresh sunflowers were placed on each dining table at the request of the rapper, too.

“A lot of effort went into designing this restaurant,” said Cam Valdez, 30, who was serving tables at the Powamekka Cafe that Friday afternoon.

“I can’t imagine what it’d been like had he only been alive,” said Valdez. “We realized there were so many factors and components we had to consider in putting this together, one could just imagine how passionate Pac truly was when he put together this vision.”

Pictures of Tupac’s favorite albums by some of his favorite artists such as Michael Jackson, Marvin Gaye, Jimi Hendrix, New Edition and Run-D.M.C., were on display all throughout the restaurant and photos of Social Activists and Ministers Martin Luther King Jr. and Malcolm X, were also on display.

“I thought the restaurant was dope,” said Tiara Burke, 23, a Psychology student at LaGuardia Community College, from Manhattan. “They covered up the, “Sweet Chick” sign outside and put, “Powamekka,” the music was straight Tupac which you don’t really get to hear nowadays, and the food was so good. I’m glad I was able to attend and be a witness of this.”

The legendary rapper’s restaurant was run by the estate of the artist, in collaboration with Sweet Chick and merchandising company Bravado, a Universal Music Groups brand.

“It’s our duty to create opportunities for our artists to fulfill their creative vision and give their fans new ways to engage with them and their music,” the CEO at Bravado said in a statement.
A tribute cafe similar to this one in New York City also popped up in Fresno, California last September in honor of the 20th anniversary of Tupac’s death. Hundreds of people waited in line to check it out, some as long as three hours, and food even ran out.

This time however waiting time for seating at Tupac’s Powamekka Cafe was an average of about 10 minutes and reservation options were also available online so no one would miss the event.