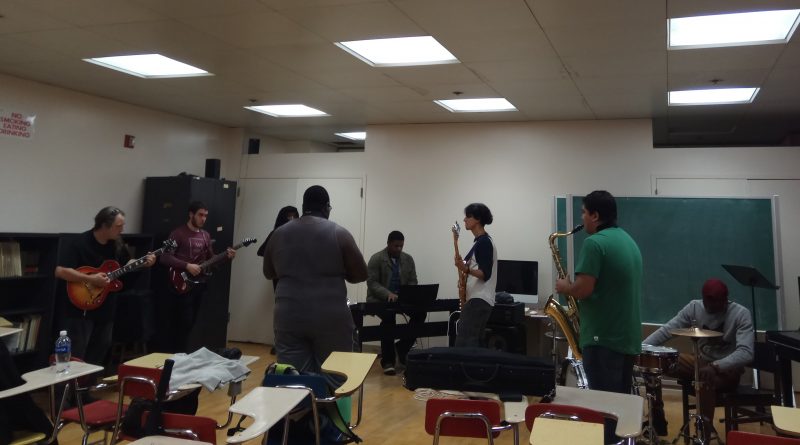 Room LL01 was filled with the sound of music as York students from various musical backgrounds met on Aug. 29 for the first ever York College Community Jam Session.

With no predetermined track, the session, hosted by the York Music Club, was simply about students having fun and “letting the music flow,” as Mark Arias, the music club’s president, kept telling everyone.

At the beginning of the Jam session the musicians, Yaw Yirenkyi on piano, Eduardo Dominguez on saxophone, Kristen Payton on vocals and Mark Arias and Eleftherios Taliakos on guitar, stood around in a sort of scattered semi circle playing around with different chords and tempos.

Most of them had just met that day, and were still getting a feel for each other’s music but despite that they simply started playing right away not wanting to overthink it and instead just let the sound evolve by itself.

Using the piano as an underlying musical guide, they started to get the feel of the music and would pause briefly to discuss their vision for the jam session and give pointers to each other. Calling out suggestions about how the tempo should be and whether someone should play louder or softer or in a different chord.

Thomas Zlabinger, a music professor at York, encouraged the students to take a risk and play around with the different sounds from their instruments.

“Don’t worry about making a mistake, we are in school everyone’s here to learn” said Zlabinger.

As the jam session continued and new musicians joined, the jam session grew more musically diverse with Dai’sha Rabalais joining in on violin, Dixon Morisseau on piano,  Enrique Villatoro on clarinet and Patrick Parker on the soprano sax. Instead of stopping the music, those joining just integrated themselves into the flow of the music.

The jam session was a mix of different sounds with tempos increasing and decreasing at random but harmonial paces. Sometimes the music would sound a bit more like smooth jazz then move to easy listening sounding tunes then even begin to show a little bit or a pop/rock sound.

Even from the audience singer Kristen Payton would offer up her opinion on what she thought the music should evolve into then join in by adding some singing ad libs to the instrumental.

Zlabinger said that the point of the session was to “promote live music at York. I want to help create music leaders and allow them to freely create their own music.”

The music club will be hosting Jam sessions in room LL01 every Tuesday during club hours and is open to all students.