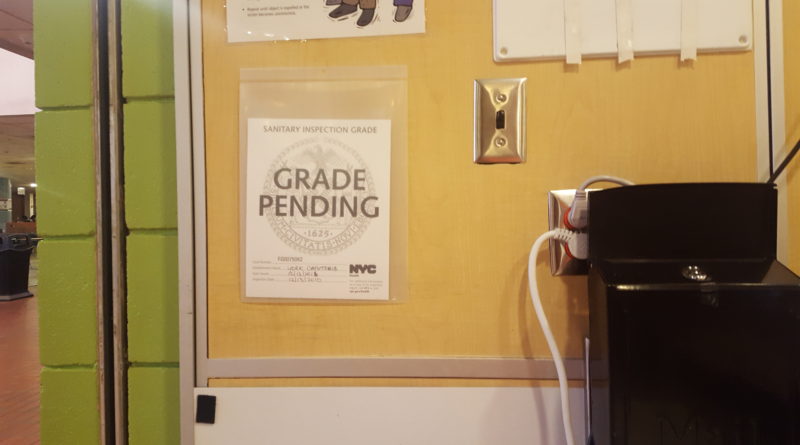 The college cafeteria’s “A” rating has been downgraded after health department inspectors once again found evidence of mice, vermin and unsanitary conditions, then slapped the facility with six violations, four of them considered “critical,” after a Nov. 23 inspection.

Under the rules of the NYC Department of Health and Mental Hygiene, the Nov. 23 inspection was considered an “ungraded inspection,” and cafeteria workers were put on notice that follow-up “graded inspection” would be conducted.

The cafeteria was permitted to continue displaying its “A” grade sign by city officials until it was re-inspected on Dec. 13. During that inspection the cafeteria racked up 20 violation points.

York would receive a B grade after the re-inspection under city guidelines, but as of press time the “A” grade poster was replaced with a “Grade Pending” sign.

Carolina Rodriguez, a spokesperson for the NYC Health Department Press Office, addressed the inspections via email.

Some students showed growing concern for the cafeteria because of York’s spotty history with health inspections.

“I would buy food from the cafeteria, but never again,”said Fatima Uddin, a sophomore and undecided major. “It’s convenient to have Aladdin food here, but it’s not worth it.”

Pandora’s Box investigated a similar inspection last year that found seven major violations and accumulated 38 total violation points on Jan 14, 2015. Some of the violations included evidence of live rats, mice, and roaches in York’s food, filth and flies in and around the cafeteria, and cross contaminated food.

Video taken by a student of three rodents running across the cafeteria floor spread through instagram and started PB’s investigation.

The release of this information sent threats of lawsuits to Pandora’s Box by York officials and a “no comment” response from the Aladdin Food Management Services, the vendor which contracts with the college to provide food service.

This semester Pandora’s Box obtained and posted video of a raccoon trapped behind closed gates of York’s cafeteria.

Andy Peralta, a freshman and Computer Science major, said he didn’t eat at his high school cafeteria food and certainly will not at York. But he added that he sees a possibility for the cafeteria to improve.

“They could do better if they follow the right criteria like wearing appropriate attire and hairnets,” said Peralta.

Michael Dzhurayev, a junior and Psychology major said he buys the chicken tenders from the cafeteria occasionally and that he’s not surprised by the number of violations.

“For me its a CUNY, so its not going to be the grades it should be,” said Dzhurayev. “I would expect above a B but not a C or below.”

An Aladdin Food Management Services marketing employee said the college’s Aladdin manager at York would have to be contacted for any inquiries about health inspection quality.

Henry McCants, kitchen manager of Aladdin here at York, said he couldn’t comment about the inspection nor make any statements prior to the graded inspection. He did mention a contract being worked on between Aladdin and York to fix some issues associated with the building’s old age that affect the cafeteria.
Queens College, John Jay College, Brooklyn College, and City College’s main dining halls hold an A grade under inspections held this year.