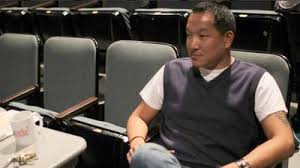 Earlier this month, a memorial service was held in the Little Theatre for the late Timothy J. Amrhein, the former chair of the Department of Performing and Fine Arts at York College.

Amrhein passed away on Oct. 6 after a short battle with cancer.  He began working at York in 2000 as an Associate Professor. After former Performing Arts Department Chair, Kenneth Adams passed away in 2011, Amrhein was elected to serve. For the past 5 years, Amrhein also helped with the college’s theatrical productions and served on multiple research committees.

“As both a colleague and a dear friend, he had a tremendous impact on me,” said York’s Men’s Center Director, Jonathan Quash. “Specifically, his passion for offering students the opportunity to experience the magic of theater had the greatest impact on me.  He was very dedicated to his craft but he also felt that we should do all we can to provide our students a chance to participate in something that would allow them to explore their talents. He will always be remembered for the legacy he was.”

“He was a great guy,” Houghton said. “He taught me to never get too shaken up even when I completely screw up on stage. He told me the audience doesn’t write the script. I do. That always remains in my mind. And he will always live on through York.”

By the end of this semester there will no longer be a bookstore located on the York College campus and textbooks will only be available for purchase online.

Assistant Vice President for Planning and Budget Ismael Perez announced the move at the York College Senate meeting on Feb. 28 after a question about rumors surrounding the bookstore’s closing was raised by a student senator.

Perez said that CUNY’s longstanding contract with Barnes and Noble expired and the University put out a Request for Proposals, which was awarded to a company called Akademos.

The Barnes & Noble contract expires on April 30 according to Perez, who added that the company will still provide cap and gown rental services. Plans are underway for vending machines and kiosks to sell items that were popular sellers at the bookstore other than books.

When asked what would become of the space the bookstore currently occupies, Perez would only say that an announcement would be forthcoming from the administration.

He also said students could expect to purchase books from the new company at 60 percent less than retail value.

John Jay, Queens College, Medgar Evers and the CUNY Law School have already switched over to Akademos with mixed results

Although Akademos claims to be an advanced leader in commitment and customer service in their about page, the queens college newspaper, The Knight News, reported on multiple issues arising from the transition to the online book store in October of 2016.

“While the transition did not seem like a big deal, as QC is the fourth CUNY College to have an online-only bookstore, students have been weighing in on their first semester without a bookstore on campus,” wrote Ameila Inderjeit of The Knight News.

York College’s Social Work major met University requirements to allow students to earn a Master’s degree. The CUNY Board of Trustees unanimously approved the application at a meeting held Feb 21. The application now has to go before officials in Albany for final approval.

The class cancellation enjoyed by students with Thursday classes will have to be made up at the end of the semester. Provost Panayiotis Meleties announced that Friday, May 19, which had been scheduled as a reading day before final exams, will now be the final day of classes following a Thursday schedule.