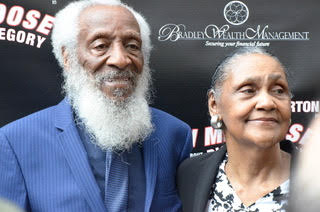 “Civil Rights: What black folks are given in the U.S. on the installment plan, as in civil-rights bills. Not to be confused with human rights, which are the dignity, stature, humanity, respect, and freedom belonging to all people by right of their birth.”

Civil rights activist and humorist Dick Gregory passed away due to heart failure at the age of 84 on Aug. 19 in Washington, DC. The first paragraph of his obituary in the New York Times described him as, “the pioneering satirist who transformed cool humor into a barbed force for civil rights in the 1960s.”

As a complex and controversial public figure beginning his stand-up career in the late 1950’s, Gregory is frequently compared with Lenny Bruce for his outspoken views on American society and credited with paving the way for African American comics like Bill Cosby and Richard Pryor.

In the early 1960’s however, Gregory turned his energies toward the civil rights movement.

Many in the York College community were unaware that his eldest daughter, Michele Gregory, is a professor in the Behavioral Science Department. Her areas of expertise are embodiment, masculinities, gender, sexuality, inequalities, race and ethnicity.

Prof. Gregory grew up with activists. She recalled her time participating in sit-ins, nonviolent protests alongside her sibling’s parents and other civil rights supporters.

“We did get arrested, they did put us in the police van, and then once we got to the police station they would let the children go,” said Prof. Gregory. “We kind of weren’t in the prison cells as our parents.”

When asked if she ever felt fear or worry when she protested, Prof. Gregory said, “It is funny when you think about children and a lot of the ways they learn how to be afraid is from their parents,” said Prof. Gregory. “Because our parents never instilled that kind of fear in us.”

She recalled a time an officer grabbed her sister as a form of intimidation. “I was at the age of five when my sister Lynne was three. We were actually arrested. We were living in Chicago in the 1960’s,” adding that this one of many incidents she experienced during the violent and racist time in which she and her siblings grew up.

Prof. Gregory explained what her parents would tell them if an officer approached them. “My mother always taught us to put our hands on our hips and to say to the police officer ‘you have our name and number leave us alone,’” said Prof. Gregory. “So like what are you going to do with us?”

She remembered another time when she was at a non-violent sit in protest. “The police went to my sister, who was three,” she said. “We were sitting and they picked up her legs. They didn’t drag her, and you know it probably was an intimidation and I leapt up.”

“I remember when I was a youngster,” she said. “Television was in black and white. We would watch our father get beaten in the news.”

Dick Gregory and his wife Lillian were married for 58 years. Both came from poverty stricken areas. Dick Gregory came from St. Louis, Missouri. In his teenage years, he began his journey as an activist when he became part of the track team just so he could shower, his daughter recounted.

“Turns out he became one of the best one-milers in the country, but because of racism, the Scholastic Track and Field books would not list black runners,” she said. “Not only that but the meets were segregated. It would be white kids and then everybody else. ”

She said her father refused to accept the status quo, so he protested to make his state an equal and integrated center for track and field. His efforts helped make Missouri the first state to pass the law of integrated sports.

“You don’t always have to plan it,” she said. “Sometimes you are just in a situation, where you know you have to do something.”

Prof. Gregory also teaches her students the merits of non-violent civil disobedience when they feel like acting aggressively is the answer. “There is a moral compass in the way a person is treated with dignity and respect. That is absolute, no matter who you talk to.”

Dick Gregory was well known for saying, “I am not a comic, I am a humorist.” Prof. Gregory said, “For him the Civil Rights movement was a paramount, it is more important than being a comedian,” she added. “A humorist is more connected to humanity. It is also seeing the humor in life.”