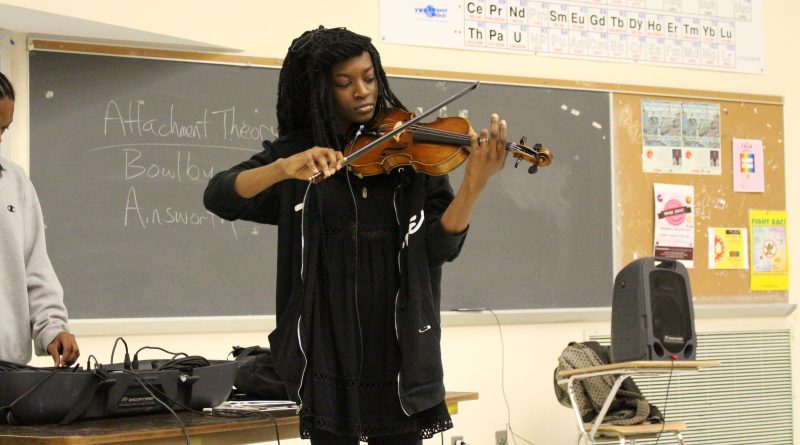 Urban Poets Movement presented the event “Rock the Mic” for the first time at York College on May 4 in room 3D01 bringing activists, poets, writers, performers and York students to share their talents.

The event was sponsored by the National Association for Music Education, an association that covers all aspects of music education at the local, state and national levels.

Daijha Rabalais, 20, a Music major at York college who also models and serves as president of NAFME, invited the Urban Poets Movement to come to York. At the event she performed her own untitled violin piece mixed with a hip-hop background.

“People put me in a box since I play a classical instrument,” said Rabalais. “I want to show that you can mix the violin with rap or rock music not only with classical music.”

“There are people who tell me I should transfer to Queens college because they have a classical music program instead of a jazz program like York,” said Rabalais.

The event was hosted by Nile Alexander, the founder of the Urban Poets Movement, and co-curated by the host, writer and actress Raquella “Rocky Snyda” George. Both hosts also performed at the event.

“I want people to laugh while people are performing here,” said Alexander. “You guys have finals coming up so we are going to turn this place up.”

Alexander said he used to perform on the trains and it helped him cure his anxiety. “Performing on the trains taught me how to overshadow my fear and to become a better performer,” said Alexander.

“People don’t know how hard it is to perform on the train,” said George, the co-curator of the event. “You have to go out of your comfort zone. It’s almost compared to a theater where you are performing for the toughest crowd which is New York City.”

Messiah “Allmessiah” Ramkissoon, a poet and youth activist, recited three of his poems at the event, Systematic Slavery, Original Woman and GOD MC.

“A lot of my poems are about roads to happiness, liberation, finding self, self-love and freedom,” said Ramkissoon.

He added that as an artist, it is his responsibility to highlight issues where society doesn’t need to turn a blind eye and a deaf ear.

Jerome “Jay Resurrection” Barrett, a senior majoring in History at York College, performed his song Pupils. He explained his song is called pupils for those who say they believe in something.

“So the first line, ‘You wanna say you the best but check back,’ means that you have to look at what you have done in the past, to remember where you come from,” said Barrett.

“The second line, ‘looking at yourself with a tear in the mirror,’ translates to people who believe in Christianity but they aren’t following the rules of Christianity,” said Barrett.

Barrett added that the song can be interpreted in two ways: you can be talking to yourself or to anybody else.

The other performers were, Remy Roy, Byrichcolesoy and Young Wess, a York graduate.

“It was nice to allow the students to rap and speak their thoughts through poetry, spoken word and hip-hop/rap,” said Professor Mark Adams, an adjunct with the Music Program.

Adams said the event was a success and, “We intend to have them back.”