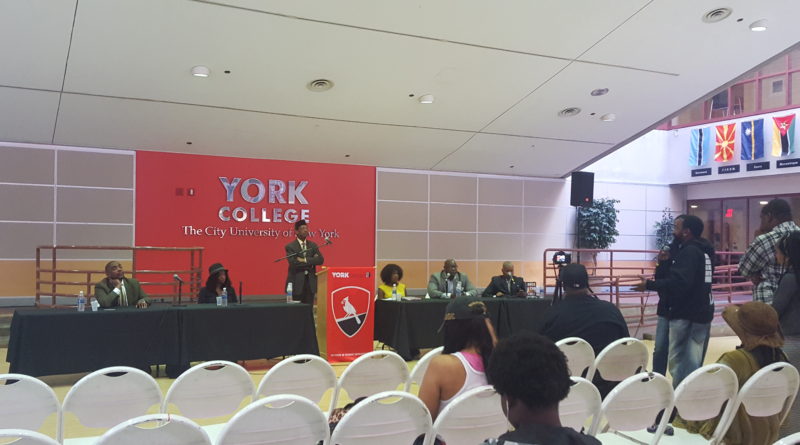 A panel discussion held on Oct. 18 and hosted by Prof. Ron Daniels discussed recent events on the killings of African American men by law enforcement across the country.

“Everyone has witnessed on live television and social media in a way that is unprecedented,” said Daniels. “The bullying of black men and the black community at large.”

“These cases of horrific killings of black, brown, and poor people by law enforcement isn’t something new,” said Damon. “I started in law enforcement in 1990 and that was before cell phones. Other black law enforcement officers have always complained about these type of killings. We always knew that black people and these issues went on in our communities but with technology, the world can see what we complain about.”

Damon also explained the culture of the police force involving officers trained to justify their actions. Indifference seems to be the cause of the lack of accountability on officers making decisions of the law. On the opposite spectrum of law enforcement are those who faced the system through incarceration and the underrated practice of racial profiling.

Dr. Ivan Prior is a former incarcerated person and works with those in a similar position to become accustomed to society outside of the prison system.

“There was never a time where America wasn’t racist,” said Prior. “So if you’re looking for a point of reference and saying ‘Well let’s look back at a time where black people were treated with respect and dignity,’ there is no such time in America. So that creates a very serious problem for us because we don’t have a model that we can go to or go back to. We have to create a model for respecting black lives.”

Retired NYPD Deputy Inspector Corey Pegues also spoke at the event. Pegues made headlines two years ago when word leaked out that he was seeking a publisher for a memoir about his early life before joining the police force. In the memoir, which was published this year, Pegues admitted he was a former drug dealer with ties to a crew that was involved with the 1988 murder of Officer Edward Byrne.

Pegues said that incidents with police officers involve police tactics. He discussed the recent shooting of Terence Crutcher in Oklahoma, an African American man who was shot by a white female officer. Pegues suggested that the officer should have used more restraint during the incident.

“If you put yourself out there like a cowboy, you’re almost in the situation where you have to shoot,” said Pegues. ”You don’t take the job and use being scared as a fear tactic to kill somebody. If you look at the video, what she should have done was get behind cover, and give clear and concise orders.”

The split second decision made by officers requires an adequate environment and methods that aren’t taught in the academy. Pegues also spoke about the Eric Garner case and how the arrest could have played out in a better way.

“That’s me with Eric Garner; ‘Hey listen big man. I don’t know boxing or karate or jujitsu, I’m not fighting with you but you have to come with me. Now we can do this two ways, either you can come with me, I put you in the car and put handcuffs on you in the precinct because the sergeant wants to see them or I can call the boys,’” Pegues said.