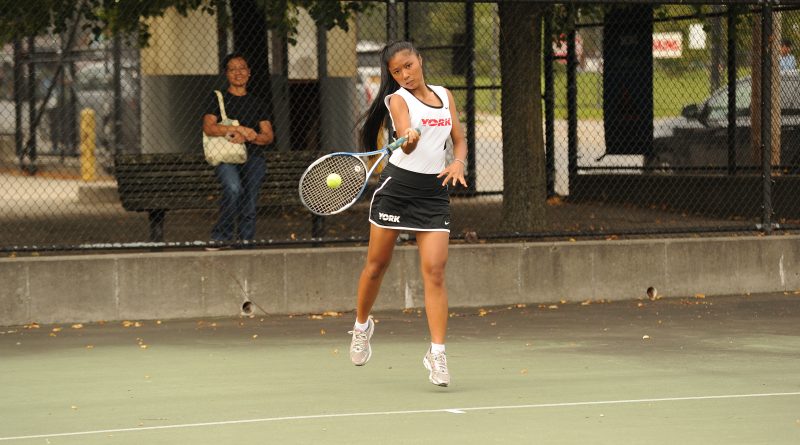 Imagine yourself in the position where you are working hard to focus on being a student and a super student athlete. It sounds a bit challenging, but for Geraldine Guese, this is what her life is like.

Guese, 21, is currently a senior at York College and is a multi-talented athlete. This Fall semester, Guese has been a part of the soccer and the tennis. In previous semesters, she has focused on in-door and out-door track as well as swimming.

Like any other athlete, Guese has experienced strength and weaknesses in some aspects of these sports but thankfully for Guese, her strengths outweighs her weaknesses.

“My strengths are agility and my stamina,” Guese said. “I am able to move around a lot and read where the ball might be coming from with my opponent. My weakness would have to be my serve but I have seen so much more improvement with that this semester.”

Guese makes her academics as much of a priority as her sports. Her intended major is Occupational therapy and She is working hard on getting into the program. Unlike most athletes, Guese does not intend to have a career in sports. She just plays the sports as a hobby and does not wish to be a full time athlete.

“I’ve always done sports, I grew up doing sports but it’s not my career path,” Guese said. “I want to be an occupational therapist.”

Though being a major full time athlete is not in her future, Guese is doing an amazing job as a student athlete. She was recently named ‘CUNYAC Women’s first-team All-Star’. Guese said she was shocked when she heard the award was announced.

According to Guese, all coaches at York College acknowledge that as a student athlete, being a student comes first. She expressed that it is a balance but her coaches always push their athletes to work hard academically. Especially considering the fact that York has a GPA limit on all athletes that they must meet if they want to play their respective sport.

As a full-time student, Guese says she faces some struggles balancing and finding ways to be  successful both as a student and as an athlete.

“Sometimes it’s hard finding the time to study because of the amount of practices and games that we have,” Guese said.

But, despite the struggle, Guese prides herself in still meeting deadlines and doing well in all things class related.

One famous athlete that Guese looks up to is Serena Williams. Williams is best known for her tennis career and Guese admires William’s performance on the tennis court

“She’s a very strong, confident woman and she stands her ground but she also has a fun personality and that is a great combination,” Guese said about Williams with total awe. “She is one of the top athletes I look up to.”

Although, Guese does not want to become a full time athlete in the future, she urges all student athletes that are looking to that future to put as much time, effort and commitment into their education as they do their individual sports.

“Education is the stepping stone to life,” she said. “Education opens up your mind to various things, sports and non-sports related so it is very important that every athlete gets an education.”

As a successful student athlete, it is probable that many young aspiring athletes may look at Guese and want some form of encouragement or advice.