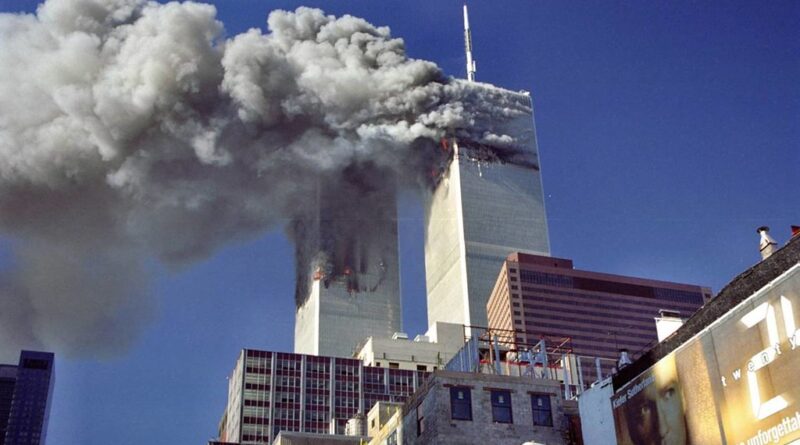 The World Trade Center, also known as the Twin Towers, shortly after both buildings were attacked 20 years ago. |Photo courtesy: cattias.photos via Creative Commons

York College has seen many different faces during its existence as students, faculty and staff move through their careers. However, some stick around longer than others, sometimes long enough to share their experiences at York 20 years ago on the morning of the Sept. 11 attacks.

Psychology Professor Donna Chirico was a full-time faculty member at York on Sept. 11. In an interview with Pandora’s Box, Chirico said the news of a plane hitting the World Trade Center was delivered to her and her colleagues in the Behavioral Sciences Department Office.

“Like so many places, somebody came in and said ‘A plane has hit the World Trade Center’ so we had TVs in the office and we immediately turned it on but no one initially thought it was a terrorist attack,” said Chirico. “Then of course a few minutes later, we realized it was something entirely different. Suddenly in minutes, the city was locked down.”

Margaret Vendryes, a full-time art history professor at York, was also teaching at the campus on 9/11. Vendryes, an associate professor of art history at the time, says she was in the middle of teaching an art history class when the Administrative Assistant for Performing and Fine Arts, Jocelyn Heywood, walked into Vendryes’s classroom and slipped her a note.

“My first thought was that there was something wrong with someone in my family because it had to be big for her to walk into the room and disturb the class,” said Vendryes, mentioning the note saying something to the effect of a plane crashing into the World Trade Center. “I walked out into the hallway with her and she really could not explain to me– she said that the chair [of the Fine Arts Department] says we should let the classes go. When the second plane hit, everyone knew it wasn’t an accident.”

Following the release of her class after United Flight 175 crashed into the South Tower, Vendryes developed an anxious feeling about what would follow the attacks.

“The first thing that came to my mind was that there was going to be a war,” said Vendryes, who had two young adult sons and was worried about the possibility of them being drafted. “My chest just tightened up and it was not a great moment. It was so difficult to understand what we were supposed to do.”

Chirico reflected on the environment at York College after the planes hit the towers, saying there was an “idea of comradery.”

“You have this huge event– lots of people have been affected, lives are being destroyed, but in here, we were safe,” said Chirico. “So in that community of safeness, we were processing how fortunate we were but also worrying about other people.”

Deborah Majerovitz, who was an assistant professor of psychology in 2001, consoled a former student whose husband was among the missing from the World Trade Center. The student, Minerva Mentor Portillo, called Majerovitz to ask for advice on what to tell her two young sons about where their dad was.

“She said in the message that her husband, Anthony Portillo, worked in the WTC for an architecture firm,” Majerovitz said in an email interview. “He had not come home and she had not heard from him. I called and offered comfort, reassurance, what wisdom I could, but realized that he was unlikely to be OK. Clearly, she was not yet ready to process that.”

According to Majerovitz, 48-year-old Portillo did escape his office in the North Tower, only to be killed by a piece of falling debris in a subway stairwell. Mentor Portillo discovered this when she made the fateful decision to call the morgue.

“My connection to the Mentor-Portillo family made it more than just a news story or national crisis,” said Majerovitz. “It was something that impacted our York College community directly.”

Chirico said the president of York College, Charles Kidd, gathered everyone together but also described the state of mind amongst those at York as “zombie-like.”

“In that one moment your entire life has now changed,” said Chirico. “You literally, initially, walk around outside of yourself. You are not processing things; it takes months to process. In that moment it’s almost as if you are watching yourself. People were just walking around in shock.”

“Even though we knew that by September 13, when York reopened, that anyone still missing had died, part of us wanted to believe there was hope,” said Majerovitz. “When Minerva asked me to help call hospitals to look for her husband, I agreed. A colleague in our study said, ‘You know you are not going to find him.’ I replied that I knew but had promised. She replied, ‘OK, give me half the names.’”

Twenty years later, the nation is grappling with another crisis– COVID-19. While some say there are similarities in the American response to Sept. 11 and COVID, differences exist as well.

“There is a much different sense of being thoughtful among people; showing respect for people’s health and well-being,” said Vendryes, referring to the pandemic. “I wouldn’t see them [COVID & 9/11] as parallel. A lot of sad reactions to 9/11 like finding people who even look slightly Arab, they’re now the enemy– that didn’t happen with COVID. With COVID it was almost like an equalizer.”

Vendryes said the Sept. 11 attacks now resemble something that is not even a thought in the minds of those who reside in other areas of the country.

“It’s almost like it’s a very New York-centric remembrance than if it was global or even national,” said Vendryes.

Chirico said the response to COVID has been more divisive than Sept. 11 was.

“So you have people who think you should get vaccinated and you shouldn’t get vaccinated, people who think you should wear a mask and shouldn’t wear a mask,” said Chirico. “We see a tremendous disheartening divide politically in this country. None of the parties want to come together, it seems to me, for the good of the country. There’s no compromise, there’s anger, there’s this unbelievable misinformation that goes all over the place.”

“Loss of jobs, illness, debilitations– on top of all the problems that were there, we have another set of problems, for a variety of reasons,” said Chirico. “Then people keep talking about going back to normal, but 9/11 should have taught us that there is no such thing as normal. Normal is whatever we think is normal in the moment–norms change. We create norms; norms are socially constructed. And I guess I’m very disturbed that we’re not working together to create norms that can be inclusive. We just seem to be making things more divisive.”

Majerovitz said that Sept. 11 showed that life can change spontaneously, and that although fear is present, fear cannot disrupt the way of life.

“Both were important lessons for Covid,” said Majerovitz. “I think that sadly, we are less united in our response to COVID, likely because we can’t gather in groups as we did then.”