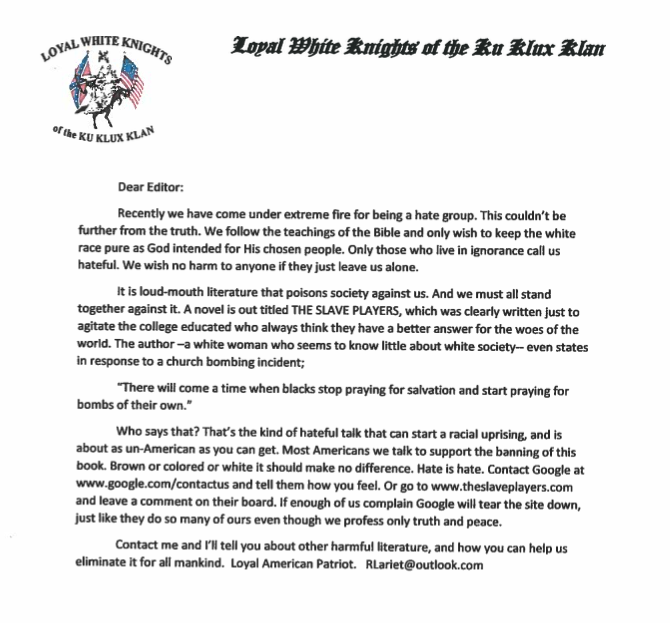 A racist letter sent by someone claiming to be from the Loyal White Knights of Ku Klux Klan within the first weeks of October to college campuses across the country was also received here at York College.

Campus officials informed the college community of the message and reassured student safety in an email on Thursday, Oct. 5.

“We follow the teachings of the Bible and only wish to keep the white race pure as God intended for His chosen people,” the letter claimed. “Only those who live in ignorance call us hateful. We wish no harm to anyone if they just leave us alone.”

The writer criticized literature and media outlets for their portrayal and claim their intentions are for “truth and peace.” The memo also listed contact information and encouraged others to join their cause.

Their faculty advisor then promptly handed the letter to the public safety department, Sepulveda added.

The letter also quoted a portion of a book titled The Slave Players by Megan Allen and urged people to boycott the book. Her book is a fictional tale of a dozen teenage girls victimized by racial discrimination in a small South Alabama town. One reviewer on Amazon called the book an “emotionally charged tale” and praised the book for touching on big issues.

“The story has a very strong message, and that is, no matter how much we strive in trying to make the world a better place, there are always some bad apples trying to destroy it for the rest of us,” wrote Jeyran Main, a professional book editor and reviewer.

This isn’t the first time the KKK and other hate groups presented themselves in the past months.

In the Charlottesville protests early August, white nationalists gathered at the University of Virginia where they met opposition by Black Lives Matter supporters.

Protests began when the city announced it would take down the statue of Confederate Gen. Robert E. Lee. Police were then forced to escort clan members off the premises due to growing safety concerns.

The letter sent to York was also reportedly received by college newspaper editors in Wisconsin and North Dakota.

“It’s scary,” said the Administrative Specialist for Scholarship Enterprises at York Julissa Contreras. “I didn’t really hear about it but it’s scary to think they have access to send a letter like that to the college.” Contreras also thinks the organization targeted York College specifically because of its diversity.

Dr. George White, the chairman to the History Department, said he received a copy of the letter along with a few other professors. He found their message disturbing.

Dr. White added that the college should still remain vigilant although campus officials make sure to protect students.

“Giving the nature of the klan they are pretty much cowards. I don’t think they would come here to Southeast Queens trying to start trouble,” said White.

Trump’s speeches about building a wall on the Mexico border and encouraging supporters to hit those who protested against him were reported by various news outlets. CNN listed a number of hate crimes spawning from Trump’s election win including the Brooklyn park with “Go Trump” and swastikas graffitied on the playground. Swastikas, vandalized cars and buildings all appeared after Trump’s victory, although he denied fueling hate inspired groups.

His response to the Charlottesville protests two days after demonstrations began fueled further controversy. He said “there is blame on both sides” in a news conference held at his Manhattan home.

Republican leaders like Senator Orrin Hatch told Trump to “call evil by its name” and disagreed with Trump’s lack of specificity.

“What some people want to do is divide as opposed to bringing people together. People want to pick fights with you when there’s actually an underlying issue,” said Tobo. “Why do we have to feed into peoples hate instead of building a community? You don’t really feed into a bully, you try to move past it. It’s really about understanding that love conquers bigotry.”