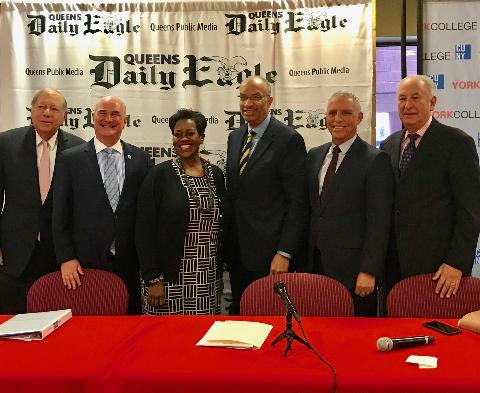 York College recently partnered with the Queens Daily Eagle Newspaper to host a Breakfast Forum with a diverse group of legal professionals to have a discussion about their expertise and experiences regarding policy changes on bail reform.

The panel discussed how bail reform had impacted the roles of judges, and the type of implications bail reform could have on the public. As of Jan. 1, 2020, New York State has abolished bail for accused defendants of nonviolent felonies and misdemeanor offenses. This allows defendants to be released on their own recognizance with instructions to return back to court.

The release of defendants has generated an enormous amount of criticism. Grasso, a York College alumnus, said he believes that the radical reform of bail does more damage than good. Grasso explained that prior to the newly enacted law, judges were able to consider whether someone was a danger to society and could hold that individual by revoking bail, but that discretionary criteria was rescinded.

Queens Supreme Court Justice Margulis also agreed that the bail reform that is now in place has its flaws. For example, Margulis shared an experience he had with a defendant who appeared before him in court with mental challenges but did not seem to pose a threat to anyone. In this case,which transpired before the current bail reform, Margulis was able to use his discretion to release the defendant. Margulis went on to explain that had this case come before him now, he would not be able to have his discretion be a factor in withholding bail if a person could potentially be a danger to the public.

“I preside over 730 cases and due to the new bail laws, discretion diminished with respect to releasing or retaining a suspect who may be mentally ill,” Margulis said.

Grasso believed that more judges such as himself should be consulted in order to address the problems of the new bail reform. Among the potential problems critics are anticipating are an uptick in crime, failure of defendants to return on their court dates and potentially committing more crimes because they do not have to worry about the penalties of bail.

Legal Aid Society and Attorney-in-Chief Seymour James also pointed out that bail was used to hold people in jail, because judges refused to use other alternatives. Once a preventative measure of bail was used to ensure people returned back to court, it became more punitive for people who could not afford high bail fees resulting in them having to remain locked up in jail.

James also stressed the point that bail requirements have disproportionately affected people of color, who make up the majority of those facing charges in the city’s criminal justice system.

“If we are going to embark on this there should be risk tools to combat racial inequality, because we must listen to people,” Judge Grasso said.

Grasso mentioned the case of upstate New York Judge Thomas Marcelle, who in early February set up a showdown with state lawmakers when he imposed $100 bail on a suspect who is facing a non-violent misdemeanor charge but has failed to make multiple court appearances across the state or pay fines.

Alisha Babar, Legal Aid Society staff attorney, shared that her cousin is currently doing time in prison and spoke about the issue of bail reform affecting family members as well as  judges, lawyers, the public and the defendants themselves.

The discussion ended on the note that the state of New York is still a long way from reforming its criminal justice statutes and that advocacy needs to continue for comprehensive bail reform.