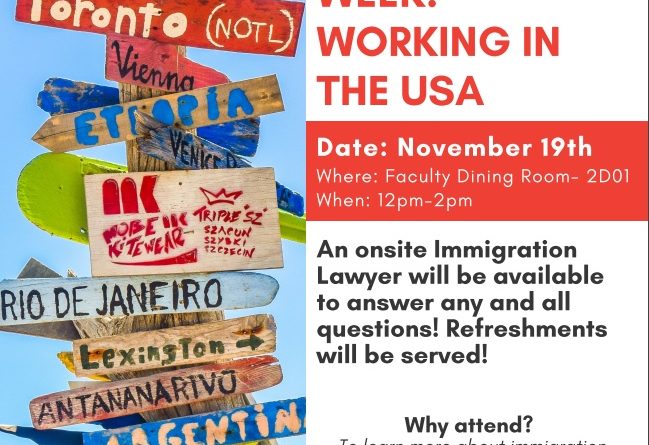 York College hosted an International Student Discussion, in recognition of students from different parts of the world, coming to York College to continue their education. The Nov. 17 event was for students to fully understand where they are, and to understand the system of immigration.

The featured speaker of the event was Arda Bashcardash, who made it clear that his goal for the overall discussion was to have the opportunity to meet with students, get to know them and their backgrounds, along with answering questions that they had on the different types of visas that were available, and how the entire immigration system works.

“I am going to be telling you about the basics of the U.S. Immigration system,” said Bashcardash, an employee of the City university of New York. “To navigate the system, to transition, you need to understand where you are, and what the system looks like.”

In the discussion, Bashcardash explained the two types of visas. The Immigrant and Non-Immigrant Visa. He also made note of the Student, Work and Tourist visas that are given by the government for those who seek to come into the United States legally to benefit themselves and the community around them.

During the discussion, Bashcardash made note of the different types of visas that are available for every different reason that one may want to seek to come into the country. The J-1 visa is a non-immigrant visa issued to research scholars, professors and exchange visitors. The J-1 visa is also similar to the F visas that are visas for non-immigrants that allows foreigners to pursue an education in the United States. The H-1 visa is also a non-immigrant visa that allows the U.S. companies to employ special types of workers who are specialized in Finance, Accounting, Mathematics, Science, Medicine, etc.

An Immigrant Petition is a form that is submitted to the U.S. Citizenship and Immigration Services to an employer to petition an alien to work in the U.S. on a permanent basis. Children who are in the States that are green card holders, do not have the right to petition for their parents to live in the United States. But if you are 21 or older, you can petition for your parents to live in the United States as green card holders.

He said that there are different types of visas that are given out to citizens from different countries, based on their original intentions as to why they are trying to get into the United States.

“The United States immigration system is based on intent, like every other country,” Bashcardash said. “You go to China, you want to study, you get a student visa. Countries where you knock on the door and say, ‘can I come in?’, they ask you ‘what is your intention?’ and depending on what your intention is you may be granted.”

Bashcardash acknowledged that the process can be complex and confusing to understand with the U.S. Immigration law. The law has been built upon certain principles that are enacted to protect refugees, working class, reuniting families, and admitting individuals into the country who contribute to the diversity and economy of the United States. Though these rules are made clear, under the current administration, it has been very difficult for immigration officials to grant individuals the right to access America or not.

“It’s a broken system the way it is,” Bashcardash noted. “Every day you read on the news about someone’s immigration tragedy. It’s really a bad system the way it is right now. And people are trying to improve it. Eventually, it will be improved, but what happens so far is that they change small things.”

“I always try to tell people not to get discouraged with what’s happening today with immigration,” Bashcardash said. “Today, things aren’t really that good. It’s not terrible, it’s not the worst that I’ve seen, but it’s not good. But there are good people out there pushing for things to get better, and because it’s a broken system, eventually it will get better.”