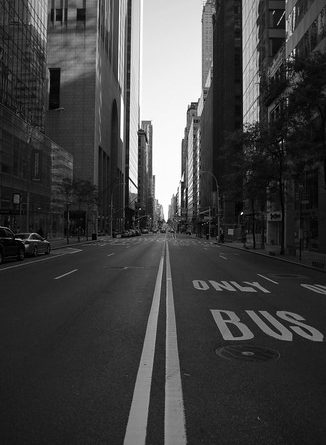 COVID-19 has made the city that never sleeps… sleep |Photo By Mazi K, Flickr

When schools shut down back in March, it was a kick in the gut and it seems like a global apocalypse had become a reality. As each month passed, New York started to feel dystopian; almost a literal ghost town as if a bomb had just gone off. Images of wrapped-up dead bodies being packed into trucks and being buried in mass graves flooded the news. All while our
president continued to downplay the severity of the situation and neglected our city.

While being a responsible New Yorker protecting my family and community by being in quarantine, the real enemy of this summer was not the virus itself but the human mind. I couldn’t help but feel like my world was turning into an episode of the Truman Show.

Trapped inside the four walls of my apartment with only my memories of walks in the park, dining indoors, and having drinks with friends to keep me company. Life as we knew it had all but disappeared in the dust of an invisible disease playing the role of the grim reaper and I wanted out.

As each day passed, the reports of cases and death continued to rise. By that point, we had gotten used to the bad news. Crime and violence started to rise here in the city as cops decided to go on vacation from taking responsibility for the systemic issues that plague our justice system. Soon, the police replaced the virus as Public Enemy #1.

When I was finally able to travel outside my neighborhood after four months of near solitary confinement for an overdue haircut, I discovered that the spirit of this city had died. It was buried beneath the rubble of its failing economy. Each block I walked on throughout Downtown Brooklyn resembled the ruins of the once-great Roman Empire. I can recall walking by a father standing on the corner holding his three-year-old son asking me for money surrounded by dozens of closed businesses. U-Haul trucks double-parked up and down Fifth Avenue as those with better means packed up to flee the Big Apple for the suburbs.

It was a surreal sight-seeing Atlantic Avenue practically empty. With a lack of tourism, it goes to show how much New York’s economy relays on it. The city is in a dilapidated state crumbling from the inside out and suffering from a broken heart. It’s hard to tell if we are going to recover from this pandemic. New Yorkers are some toughest people you’ll meet, but unlike after events Sept. 11, it feels our soul was torn out. Maybe this is the moment that New York finally goes to sleep.