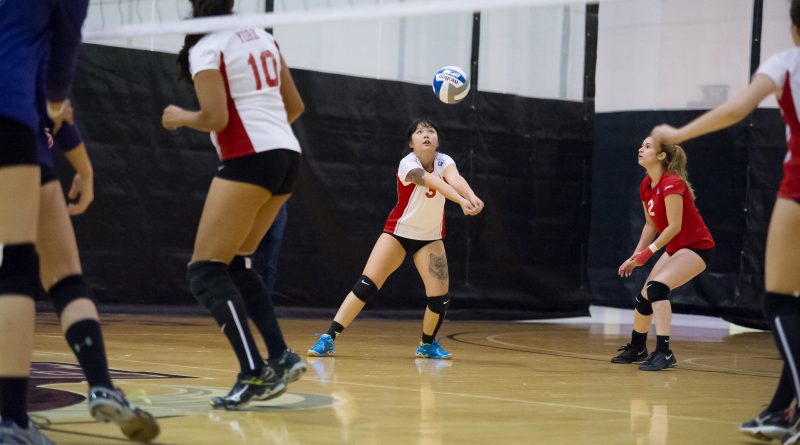 Allison Li in action at an away game. Photo Credit:Verity Rollins

With the Fall 2017 semester nearing its midpoint, many York College teams are already in full swing with their respective seasons. The York College women’s volleyball team began their season back in September and since then their record has been less than stellar. The team’s record stands at a disappointing 2-20. Their most recent win came against Medgar Evers College, which was subsequently followed by a loss to Baruch College the same night.

The team’s first win against Medgar Evers College was on Sept. 30. On Oct. 9 the Cardinals faced the Medgar Evers Cougars in their fourth CUNY Athletic Conference game. This marked the team’s first AC win of the season. The team managed to finish the game with a score set of 3-1. The team  snuck away with the first, third and final sets of the game. The biggest deficit came in the third set, with an 8 point difference.

Senior Allison Li put up 16 points in the game, the highest for her team. Sophomore Allison Ahmed managed to give her team 23 assists, setting the season’s best record. Junior Kassandra Diaz led the team with 15 digs. The CUNYAC game against Medgar Evers broke the team’s  five game losing streak. However, they lost their following game to Baruch College, resetting their streak.

The women’s volleyball team isn’t the only female team at York College that is on the losing side. York’s soccer and tennis are both suffering from severe losses. The former going 0-14-1 and the latter at 0-11. The women’s soccer team went through changes in its coaching staff prior to the new season in hopes of boosting their record for the 2017-2018 season. The changes have yet to pay off. A few of the experienced players left the team after the new coach was announced, making the team one with many new faces.

As interest in college sports grows, so does the expected level of competition. Changes in the coaching staff and the team roster signify small but significant attempts to improve a team’s status. In women’s volleyball the case can be argued that the team does not require any changes whatsoever, as it has secured two victories in the season. On the other hand, changes in the coaching staff and team could be the key to turning their win-loss record all the way around. Parveen Charran, a Nursing major, thinks replacing the coaching staff would be helpful. “Good leadership could bring out the best in the players,” said Charran. She added that a winning team would make her more interested in York’s sports.

This year’s team is on track to matching the win-loss record of last year’s team. The 2016 team ended its season with a record of 3-23. By this time last year, the team had already secured their second win. If history is to repeat itself, the team will capture another win by the end of the season.

Since the season is nearing its end, the team will not have a chance to improve their record to a winning one. Improving a team’s win-loss record is not done overnight, for some teams it takes years to end a losing drought. As the team move towards another game, York College stands proudly with their women athletes, in celebration and defeat.