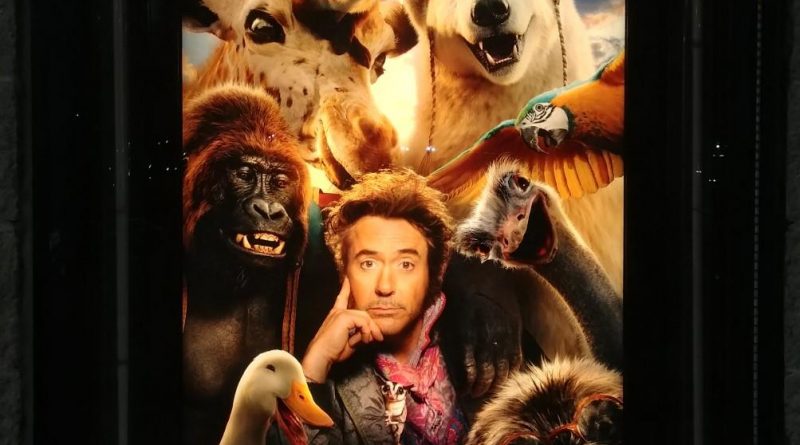 Dolittle, directed by Stephen Gaghan and originally named The Voyage of Doctor Dolitle should have stayed without a title; maybe there wouldn’t have been a movie and that’s what came to mind once the movie started.

We’ve all seen the adaptations based on the original Doctor Dolittle played by Rex Harrison in 1967, (based off of Hugh Lofting novels) and it’s safe to say that this movie just wasn’t it. Eddie Murphy’s version of this movie was not the best either. Just like this newer version of the movie, the animals were carrying the movie and they were funny.

If you want to watch this movie, the voice actors had a lot going for them in this movie in terms of their acting.

Despite the great voice acting in the movie, Stephen Gaghan did have trouble with the movie itself, according to Hollywood Reporter. The film needed a lot of CGI effects and Gaghan needed help with featuring the animals in the movie. They brought in two people that worked on Ninja Turtles: Chris McKay and Jonothan Liebesman. This explains why the animals looked great. This can’t be said for Robert Downey Jr.’s acting.

Dolittle was alright; there wasn’t anything exceptional or shocking about it. While we all know Robert Downey Jr. from Iron Man and the other MCU films, maybe he should have stayed in that field of acting, continuing as a superhero or someone with large amounts of sarcasm. This is what he is known for and he is excellent at it.

In an interview with Hollywood Reporter, Robert Downey Jr. sat down for an interview to talk about his life after Avengers: Endgame.

“I have not been forced to explore the new frontier of what is my creative and personal life after this,” says Downey Jr., who’s character, Tony Stark, was killed off in the final Avengers movie.

So maybe he chose to do this movie out of his own free will so he can see what he can do outside of Marvel? Robert Downey Jr. has been playing the same role since 2008 when the first Iron Man movie came out. Between the years Downey has played Tony Stark, he has been in seven movies outside of Marvel and two of them were Sherlock Holmes and The Soloist. These two movies were better than Dolittle by a landslide — in my opinion.

Let’s get into the reasons why this movie was lackluster.

Dolittle starts off as an animation to tell the audience about John Dolittle’s life with his wife and the wonderful adventures they go on in the past until she leaves one day on a ship and dies. Dolittle then hides away from the world and shuts out all human connection and lives with his animals. This is a great opening to the movie, but it left no room to care about John Dolittle losing his wife because while she was important in his life, she was not an important character in the movie. There wasn’t time to understand her character or to identify with her in any way.

As Downey delivered the first line, it was hard to decipher if he was trying to speak in a British, Scottish, or Irish accent–it was Welsch. Therefore, his accent was inconsistent and sounded downright awful. Downey tries to sound charming and witty, but he sounds as though he is trying too hard to portray this accent and his performance feels like a desperate attempt to be someone different. From then on the movie took a turn for the worst.

Since the movie is made to appeal to audiences of all ages but mainly for children, I’ll give it a pass because they didn’t actually use real animals in this movie; everything was made with visual effects. This was something that Gaghan had trouble with. However, for the adults that take their children or siblings to see this movie they will be confused as Dolittle has a confusing storyline. Nothing meshes well, and certain parts of the movie have no context.

We know nothing about Lily Dolittle, John’s wife—formerly known as Lisa Dolittle in the books and other adaptations—and we know nothing of how they met until close to the ending of the movie as we meet her father, Antonio Banderas as Rassouli, who is the king of pirates. From there we know that Lily’s father never liked John and he wanted her to marry someone else.

There is no depth to Downey’s character, John Dolittle. The entire movie is based around his grief for his wife and his ability to talk to animals. Besides these two things, there is nothing else that we get to see from him.

This movie goes on the list of movies that will be forgettable. There is nothing worth remembering from this movie or anything that you can take away besides the fact that the movie was trying to explain to children that violence isn’t always the answer in a scene involving the dragon. Which made no sense by the way. What a cliché message.

While I commend Downey for trying to take a different turn with his acting skills and branching out to different roles, many diehard fans will only see him as Tony Stark. Being the main actor in Dolittle does not help because we didn’t get the chance to experience the charisma we get from Downey in this movie when he plays Tony Stark.