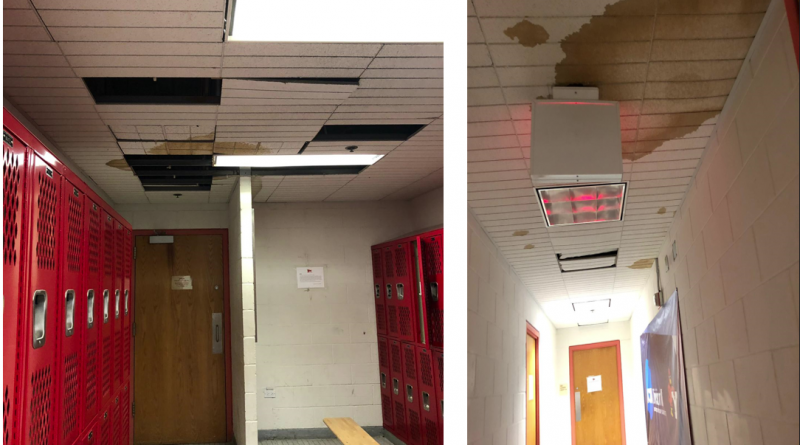 After student government representatives made a public display of photos of broken toilet seats, wires and acoustic tiles hanging from the ceiling and a variety of broken and dilapidated exercise machines in the college’s Health and Physical Education Center (HPEC), administration have taken preliminary steps to fix the longstanding problems.

The public display came in the form of a PowerPoint presentation made by Krishna Fnu, the student program council president, at a College Senate meeting held on Feb. 26.

Fnu, said a group of 10 senators decided to inspect the facilities in the building. He acknowledged that there was always an understanding that there were damages and repairs that needed to be done but they decided that they were going to document the damages.

Among the damages listed in the PowerPoint included five exercise machines that don’t work, ceilings with missing tiles and water stains, bathroom and shower stalls that have no doors, the mold found on the showers, floors and ceilings and the odor in the locker rooms. Within two weeks of the presentation an email blast to the college community indicated that repairs were being fast-tracked.

“Everybody was shocked, even the President,” Fnu said of the reaction he received after the presentation was made. “Because everybody knew there were some problems to be fixed but nobody saw it physically or even in the photos. So when we showed it, even the president was shocked that this is happening in her college. That’s why I think after seeing that in person and seeing the photos, progress is being made at this speed.”

He added “otherwise, we all know they have been repairing it since 2016 and nothing happened. But, doing this, we got the support of the faculty caucus as well, many of them reached out and even the administrators, everyone is throwing out their support.”

According to the Deneé Barracato, the director of Athletics and Recreation, repairs have been going on in the HPEC building for at least the nearly three years of her tenure.

“The improvements to the HPEC building have been an ongoing project, discussion and ‘labor of love’ since I arrived in August 2016,” Barracato wrote in an email. “We have been attentive to the building and have made significant improvements since this time.”

However, according to Fnu, the reason for the damages was because of delayed contract negotiations between the administration and the equipment repair company for the fitness center.

“We found out that there wasn’t a new contract,” Fnu explained. “So yes, they were negotiating that, but that doesn’t mean that they can’t fix what’s happening in the bathrooms and what’s happening with the ceilings.”

Barracato says otherwise. She said the reason for the delay is because the work order put in for repairs with the company was not done or processed properly.

According to Barracato, a new repair company that the athletics department is working with is not familiar with the paperwork filings of a public institution. She said the company was sending in invoices and not quotes for work to be done rather than work that is already done.

“They cannot send in an invoice for work that hasn’t been approved,” Barracato said. “They need to be approved first and then we go through a quote process, we submit the quote for a withdrawal request and that gets approved based on budget and after the appeal gets dispatched to the company, they do the work based on appeal that is released and then they submit their invoice for work that is completed and then you get paid based on your invoice.”

She added “They were doing everything backwards and it took a while for us to get them to understand that we are a public institution. Here, we require quotes before we tell them that yes, you can move forward the work.”

Barracato also said that the degree of damages in the building increases because the building is old and the regular wear and tear takes a toll.

“We all try to do our best and be notified of anything that’s wrong with the building or damaged and has to be repaired,” She said. “There are so many things that needs work and sometimes we have to prioritize depending on how much staff you have and the budget that we have. And, I think our staff does the best that they can.”

Barracato mentioned that there are many users of the building. Such as the Queens High school on campus, athletic teams, students using the recreational services, rentals (gym and pool), student activity groups, classes that are scheduled in the building, and other college events. She says it is very difficult to manage all improvements and repairs because of the various activities and events constantly going on in the building.

“It’s also about how we care about what we have,” She said “It’s just a matter of how well we as a community take care of what we have. I don’t know if it’s a perfect solution, I don’t know if it should be a blaming game because I think we all have the responsibility of maintaining and keeping the facilities up to standards.”

She added, “I know it’s a collaborative effort and I think it’s everyone’s responsibility to come together and bring it to light in a professional manner.”

Fnu was critical of the way money allocated to the Athletic Department was being used. According to the PowerPoint presented, the Athletic and Recreational programs were allocated over $265,000 every year to support teams and provide students with recreational hours. $25,000 of that amount is allocated towards maintenance.

“We all know the money problem,” Fnu said. “There is no way that they have enough money to do all of (the repairs) at once. So, even if they take care of big problems like the ceilings and equipment, that will be acceptable for us right now with the problem we’re having.”

He added “We definitely think more should be done but as we all know York, it takes time,” Fnu said. “But like right after the presentation, within a week, we were informed about the disability chair, they fixed the  broken seats and now they are working on the ceilings, so that is a start.”