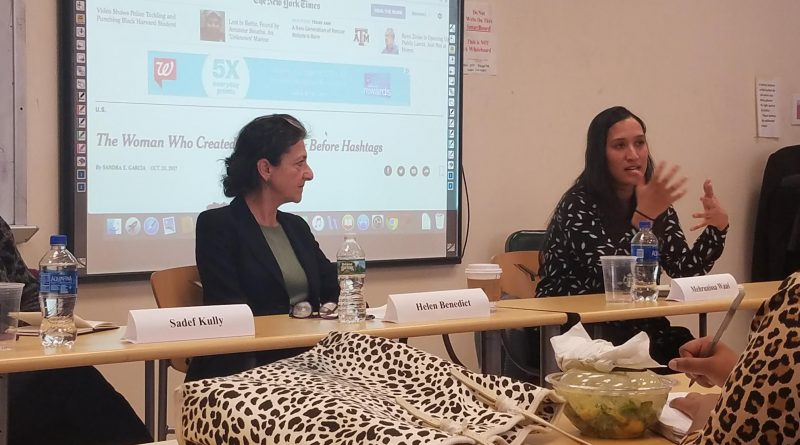 The Journalism program held a #metoo Movement discussion panel on Thursday, April 17. Helen Benedict, a journalism professor at Columbia University, along with two York alumni Sadef Kully and Mehrunissa Wani, spoke about their experiences as women working in the journalism field.

The #metoo phenomenon has brought forward the wrongdoings of people in power and the lengths prestigious organizations have taken to cover up and defend those who have been involved in sexual misconduct cases. From former Film Producer Harvey Weinstein and former USA Gymnastics Team Doctor Larry Nassar to fallen Comedian Bill Cosby, the #metoo Movement has impacted almost every area of modern society and the workforce. Abuses that have been covered up for many years have started to get noticed and scrutiny towards these organizations has increased.

“It starts with asking the question, ‘where in our society are we teaching guys to treat women so badly?’” Benedict said. “Interestingly, when we look at countries outside the U.S., we’re good at asking these questions, but why don’t we do that about ourselves?”

Wani, who graduated from York in 2011 and formerly served as the editor-in-chief  of Pandora’s Box, said she had concerns about the speed with which several careers were destroyed recently.

“One thing that I have been struggling with is how do you give due process?” Wani asked. “Is there a due process?”

Wani stressed the importance of timing and investigative journalism in determining whether a claim is accurate or not. “It’s a really big issue,” she said. “We have a lot of women coming forth saying ‘me too’, but how do we prove that?”

Benedict responded by acknowledging the question and the problem it creates. She said it could lead to a backlash not only against the #metoo movement but also against people who try to report sexual abuse.

Benedict also addressed the controversy over major NPR personalities being let go because of sexual harassment with no details revealed to the public. “We just had to take their word for it which isn’t good enough anymore,” she said.

Kully, who graduated from York in 2009 then worked as a reporter in Pakistan, shared her experiences with sexual harassment as a journalist in several situations. She emphasized the vulnerability of young people, especially young women.”

“There should be something to help female freelancers,” Kully said. “Because you don’t have a big company backing you, if something happens you’re pretty much on your own.”

The panel offered suggestions on how organizations could better handle sexual misconduct cases such as treating every case as a serious matter and not treating the accused as if they are liars, attention seekers, and or in it to get revenge. Benedict advised that keeping records of inappropriate behavior is the best option so that there is something to refer to.

Despite these challenges, the panel expressed their hopes that the issue will get more attention since actions are being done to expose the injustices.

“These issues need to be exposed to students, so they can know what is going on,” said Benedict. “Women and men must be nurtured.”