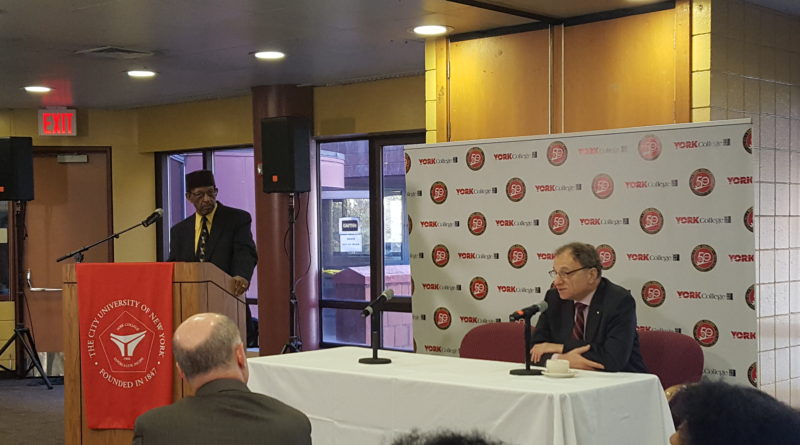 President Marcia V. Keizs opened the breakfast at 8 a.m. with thanks to faculty and alumni for attending after a fierce presidential election, the outcome of which shook the nation. She opened the panel to Ron Daniels, distinguished lecturer and political radio broadcaster with WBAI f.m.

Sheinkopf addressed the audience with an analysis on what he thought could be determined from the election results. He based his assessment on more than 30 years experience as a political consultant who has worked on more than 700 campaigns in the U.S. and abroad.

“What I see is the decline and final end in print journalism as a factor in coverage of national elections which I think injures democracy very significantly because there will be no arbiter of what is true and what is not,” said Sheinkopf.
According to the New York Times, the national polling average for Hillary Clinton was 45.9 percent while Donald Trump trailed at 42.8 percent. The nation faced different numbers come Wednesday morning when Donald Trump became President-elect.

Ron Daniels opened the floor to Sheinkopf and Thompson with the general question of how did Trump become President-elect despite his racial remarks against the Mexican community and John McCain. In what Daniels described as “gotcha journalism,” the President-elect disturbed the conventional methods of media coverage.

“In the world of 140 characters Clinton was the wrong candidate but Donald Trump was perfect because all he did was tweet all day long,” said Sheinkopf. “He directly went to the voters. There were no middle men. The consultant culture, said by someone who is solidly in the second generation of political consultants in this country, was killed by Donald Trump.”

Sheinkopf raised concerns over what Trump represents in how individual voters choose to share and comprehend information being provided through all forms of media. He believes something is wrong with the way media companies do their jobs.

“You have a 74-year-old guy almost, who lives in a building with his name on it,” said Sheinkopf. “With a gold plated toilet. Who ran a business that went bankrupt. Had to be bailed out by Wall Street. Hasn’t revealed his income tax. Then we have a woman, nearly 70, in the public station for 40 years and pummeled consecutively. What does this say about where we draw our leadership from? We are not looking forward, we are looking back.”

Thompson shared his post-election views as a broadcaster of Make it Simple, a show he created and hosts on SIRIUS XM radio. Thompson views the post election outcome as a product of institutionalized sexism and underrated political representation best coined under “the Bradley effect.”

The Bradley effect, also called the Wilder effect, stems from the 1982 race for governor of California by Tom Bradley. Some political experts claim voters lied about voting for an African American candidate in the polls but actually voted for his rival.

“I think whites lied on this poll and particularly, which is really bizarre and disconcerting to me, white women,” said Thompson. “I’ll be 50 next month. We are going to lose the Supreme Court. Roe v. Wade is likely gone. We won’t get the court back possibly, till the cycle builds, until I’m 75. That’s a very scary thought.”

Thompson doesn’t accept issues regarding the working class and immigration as an excuse to vote for a presidential elect who’s “as racist, misogynistic, homophobic, islamophobic, xenophobic, as Donald Trump.”

Tom Moore, Professor at York College’s Journalism Program and Broadcast journalist, persuaded Thompson to visit his Essentials of Editing course filled with aspiring journalists. Thompson provided students with his ideas behind the election outcome and motivation to continue efforts in truthful storytelling.

“Never before has a presidential candidate not released his tax returns,” said Thompson. “Maybe you think they shouldn’t have to but, the precedent has been set. If the mainstream corporate media decided that Donald Trump cannot stay in the race without releasing his tax returns, he would have been gone. They made the decision to say let’s focus on the woman’s emails. I think that’s one thing we saw in this whole process.”