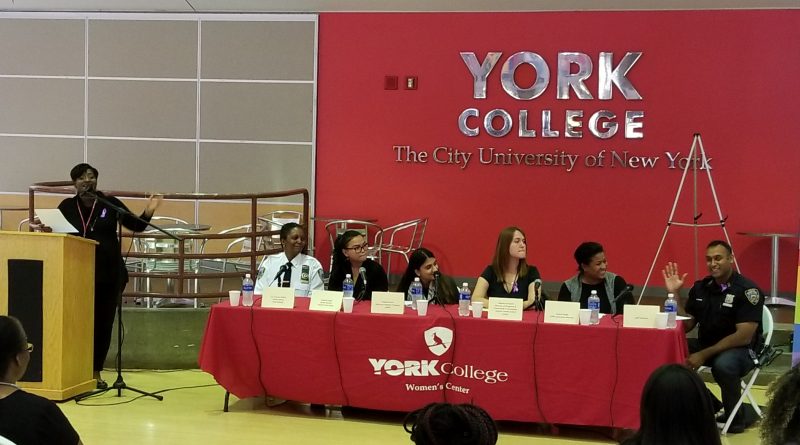 The Women’s Center in partnership with The Center for Students with Disabilities and The Student Health Services Center hosted a domestic violence health fair and panel discussion in the atrium of York College on Oct. 12.

Around 20 advocacy organizations were present at the fair to promote domestic violence awareness and support for victims.

The event was moderated by the director of Women’s Center, Ebony Jackson and sponsored by The Social Work Club, Women’s Society, Helping Hands Club and the Straight and Gay Alliance. The event addressed topics on domestic violence, what young people can do to help victims, and other topics.

Assistant Dean for Student Activities Randolph Punter attended the event and stated intimate partner violence accounts for 15 percent of all violent crimes committed. He added homicide rates increase by 500 percent in a domestic violence situation with the presence of a gun.

“These statistics are horrifying for a civilized society,” said Punter.

Garden of Hope was one of the organizations present at the health fair. The assistant executive director Jane White said the activity has increased. They have been receiving more calls and the victims calling are also males.The organization provides different kinds of crisis intervention, legal help, self-sufficiency training and shelter for all domestic violence victims.

One of the panelists, Raquel Singh, executive director of Voices of Women, shared with the public how she witnessed domestic violence at home. Her past led her to become active on the issue, but she warned it isn’t the same for every domestic violence child witness.

“I got brothers who went the other way,” said Singh. “Now they are perpetrators. Children have a different perspective on what it means to be a witness.”

She suggested victims should reach out to emergency services.

“There are some key points you want to add,” said Singh. “Calling the police is a form of safety and form of planning.”

But an issue highlighted during the event is that victims may feel nervous to contact the police. The speakers said to solve this particular issue there are other organizations that are there to provide services for domestic violence victims.

“We try to let people know that, yes we are law enforcement, but if you have a personal issue you can come to us,” said Public Safety York College Lieutenant Tamara Bailey. “If you leave me a message I will come to you.”

103rd Precinct Police Officer James Moongamakal said friends or family members could also get involved and be the ones who take the next step. He works for the domestic violence division at the precinct and they get a lot of phone calls from both male and female victims.

“You can be a third party and call the police,” said Moongamakal. “If there are chronic phone calls to the police we will follow up and investigate.”

The panel discussion started with the speakers trying to define domestic violence in its broadest terms.

“When I think of the term I picture home: mother and father,” said program manager at SAKHI for South Asian Women, Nabah Ikram. “But within the South Asian families we see extended family also inflicting violence.”

Ikram said that if at any point someone makes you feel sad, humiliates you and puts you down those are signs that you are in an abusive relationship.

She added that some of the clients who have an academic degree feel ashamed to speak up. “People would tell them you have a degree you should have known better,” said Ikram. “Don’t impose that guilt to anyone.”

Social worker for Secret Garden Valerie Capili introduced the term interpersonal violence to show that domestic violence can happen in any type of relationships.

“Domestic violence could also be financial abuse,” said Moongamakal. “It doesn’t necessary have to be physical violence.”

“It could be anything from your boyfriend checking your cell phone and calling you 20 times a day to telling you ‘I don’t want you to hang out with your friends,’” said Lt. Bailey.

The panel discussion was followed by a Q&A. One of the questions asked was how can young people combat domestic violence.

Raquel Singh, executive director of VOW, said just listening is enough to allow the victim to take the next step. She added that giving support is another way to fight domestic violence.

The speakers told the audience that phrases such as “it’s not your fault” and “we’ll get through this together” could be helpful for a victim.

Another question brought up to the panel was men’s involvement in the fight against domestic violence and how to get male victims to speak up. The speakers all agreed everybody needs to be educated in this subject.

“This is a human issue,” said Capili. “We have to hold each other accountable for any social issue. The voices of nonconforming gender folks need to be heard as well.”

The majority of the panelists work for organizations that make an emphasis on female victims, but they said their programs could also be useful for male victims.

The panelists touched on how to develop a safety plan.

Capili described what a safety plan consists of. A safety plan incorporates ways on how to remain safe while still staying with the abuser and during and after leaving the abuser.

At last, the speakers were asked if religion influences domestic violence.

“I think perpetrators use religion and culture as a scapegoat,” said Moongamakal. “If there is a religious book that allows domestic violence please show it to me. They know they are doing wrong but they still do it.”