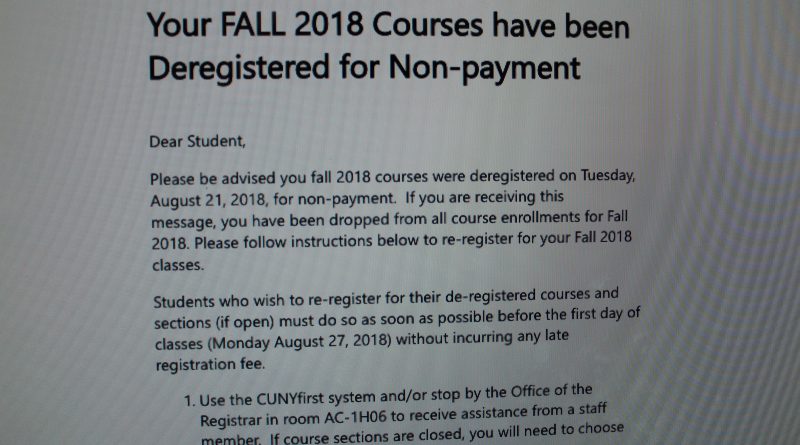 The email the Bursar’s sends after deregistering classes due to non-payment. Photo credit: Greis Torres

Behaca Surpris started out her first semester at York College emailing departments and begging professors for classes. Surpris went to her first class of the semester and her name was absent from the roster. All five classes she had registered for had been deregistered due to lack of payment.

Surpris, 16, an aspiring pediatric dentist, said she did not know that there was a payment time limit on tuition at York, and added that the experience was a horrible one.

“I understand that it’s all about the money too, but it’s not fair because I registered for my classes earlier,” Surpris said. “So it’s not fair that someone, just because they have money, gets my spot even though I worked hard for it and registered early for me to get classes.”

A total of 2,786 students began college life this fall by having their classes dropped during the Fall 2018 purge, according to Provost Panayiotis Meleties.

Every semester, students across all levels are deregistered from their classes due to lack of payment. According to Meleties, the Bursar’s office sends out a reminder email when the deregistration of students’ classes is about to occur. This, according to him, usually takes place about seven to 10 days before the semester starts. The threshold for the Fall 2018 semester was $260 and all students with tuition debt higher than the threshold were deregistered.

“I sent them emails personally to all the students that were deregistered,” Meleties said. “Two emails went out. One from the Bursar office and one from the Provost about 5 minutes after deregistration occurs.”

However, many students claim they never received an email, including Karishma Sonilal-Rambarran, 20, an undeclared transfer student attending her first semester at York.

Sonilal-Rambarran said she was less upset about the dropped classes but with the fact that she never received an email. She views college itself as a difficult process that doesn’t need to be made more tedious.

The question that most freshmen had was why were the emails not sent to their personal emails that they had registered with? However, Meleties insisted that the emails sent out from his office and the Bursar’s office in fact went to the designated emails on the students’ CUNYFirst accounts.

“I don’t think the way they went about it is really professional because school did not start yet and I don’t think students are really looking at their (school) email,” said Surpris, who had five classes dropped and is currently registered for three classes. “And nobody ever told me that I had it (Yorkmail) because when I went to the Academic Advisement Center, they never told me. They just told me ‘just take care of your financial aid’.”

The Provost and the IT Department are going through an ongoing discussion to provide students with a Yorkmail once they are admitted into York as opposed to the current policy, which activates the email at the start of classes. The director of Academic Advisement is also working on it.

“I got so pissed off and it needs to reach to a point where it’s such a norm in this school where so many people are complaining and they just let it go on past,” said Sonilal-Rambarran. “Sometimes, the rights of the people need to be addressed and if I can honestly make a change in some way for future generations to come, sign me up because it’s not funny.”

Meleties recommends that students use their York emails as their designated email addresses.

Professor Heather Robinson, the chair of the English Department, views this deregistration issue as a communication problem. She said the college is trying it’s best and not deliberately dropping student’s classes because it needs tuition money.

“It’s horrible to have students come on the first day of classes and say that they don’t have classes,” said Robinson. “We do what we can to help out but sometimes we just don’t have enough seats in classes.”