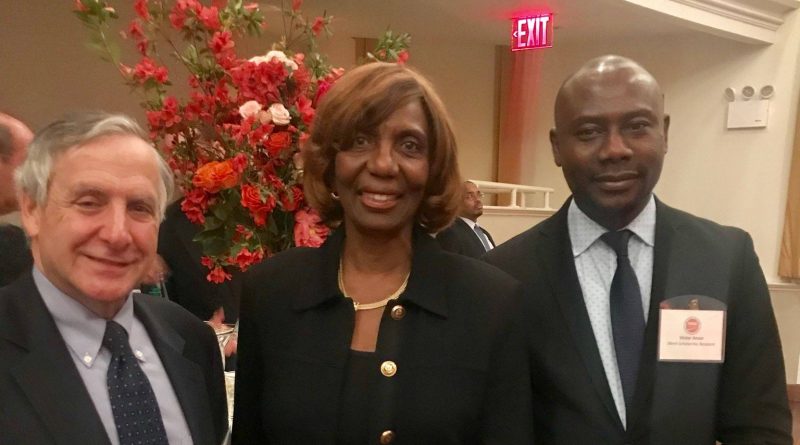 Alumni and current York College students filled every corner of the the new Jamaica Center for Arts & Learning building for the celebration of the college’s staff and students during the Merit Scholarship Reception on April 11.

Students spoke about their struggles and the rewards of their hard work despite their own doubts and the doubts of those around them.

“You will never be anything and you’re not going to make it,” said merit scholar Natalia Gayot, referring to a refrain she heard several times. Gayot also recalled that some of her high school teachers did not believe in her and received a round of applause after saying, “I leave those who doubted me embarrassed.”

Another scholarship recipient, Victor Ansor, gave accounts of the many times he went to bed hungry. Growing up in Nigeria, with a single parent who had to take care of him and seven of his siblings, he said he knew his circumstances would change with education. Ansor noted that the memories of his mother’s hard work to sustain the family became his motivation to continue to achieve his dreams.

Beth Lief, the foundation’s executive director, accepted the award and expressed to guests that each time she helps a student receive a scholarship, she strives to help even more students. Lief also noted that students who are awarded scholarships from the foundation are amazing for overcoming challenges and not giving up on their goal of getting a college education.

Lief also reminded everyone that the funds from the Milton Petrie Foundation can make the difference between students not being sure if they could complete college and going on to graduating and become professional leaders in their fields.

Upon receiving her award, Dr. Hinnau expressed her gratitude to those who came out to support her and praised the accomplishments of the countless students she has educated and counseled.

“York has so many diamonds in the rough and in life there is so much talent but not always opportunity (and) York College is a place of opportunity,” said Hinnau.

Gisele Santana, a senior at York, assisted President Keizs in presenting Hinnau with her award. Santana said Hinnau had always believed that she could become a lawyer and became the main reason why she decided to study pre-law instead of continuing her studies to become a social worker.

“Thank you for helping me pursue my dreams of social justice on a micro level,” Santana told Hinnau. “And because of you I can accomplish my dream on an international level.”