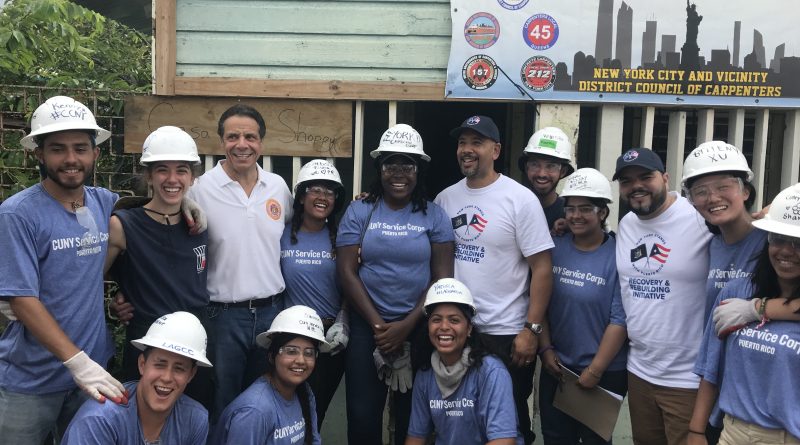 More than 200 CUNY students traveled to Puerto Rico this summer to help rebuild the Island after the devastation of Hurricanes Irma and Maria last year, including four York College students.

After filling out the online application and going through a group interview, Marie Richard, 25, who is pursuing her Masters in Social Work at York, was one of the York students selected to travel to the island for two weeks in the summer.

CUNY Service Corps partnered up with Governor Andrew Cuomo’s NY Stands With Puerto Rico Recovery and Rebuilding Effort to prepare CUNY and SUNY students for the program. Students travelled to the country along with skilled workers from the building and construction trades and many other organizations already working in the island. This opportunity was presented to students as a way to earn school credit and a $500 stipend.

The program operated from mid-June to Aug. 18. Each of the eight groups went for two weeks. The groups of CUNY and SUNY student volunteers mostly centered in the northern and eastern areas of Barranquitas and Orocovis as well as the San Juan metro area.

Richard stayed in the Universidad del Sagrado Corazon located in San Juan. During her stay she visited Old San Juan, Puerto Nuevo Beach and also took a dancing class in the University of Puerto Rico at Carolina. At the University, she learned the history of the Afro-Puerto Rican bomba dance.

The typical day for student volunteers consisted of waking up at 5:30 a.m. in order to get to the worksite between 7:30 a.m. and 8 a.m. They had meetings everyday with construction workers where they were given tasks to complete throughout the day. They typically worked on the sites until 4 p.m., Richard said.

Student volunteers logged a total of 41,000 hours, restoring almost 200 houses in 10 weeks, exceeding the goal of 150 houses, according to a press release by the Governor’s office.

“My initial expectation was to do strenuous physical work in Puerto Rico,” said Richard. “When I arrived, we did exactly what I was expecting to do.”

The variety of fruit trees and the beautiful sight of the island were among the many things that piqued Richard’s interest during her stay in Puerto Rico, but the reality that many places still don’t have electricity was an upsetting fact for her.

“While being in Puerto Rico, I was excited at night whenever we saw an illuminated street,” Richard said. “Some places in Puerto Rico still don’t have electricity.”

Hurricane Maria’s passage through Puerto Rico left almost the entire island without electricity. It is currently estimated that 60,000 Puerto Ricans still do not have electricity and access to clean water.

Cuomo announced early September that he will help 11,000 displaced Puerto Ricans living in New York to file a lawsuit against the federal government. Critics have accused Cuomo of publicizing his aid efforts in Puerto Rico to secure votes from the large Puerto Rican community for his re-election.

“President Trump never tried to help Puerto Rico,” said Cuomo in a press release. “Florida got attention, Texas got attention, and Puerto Rico got the short end of the stick. That is not just wrong and unethical and despicable, it is also illegal.”

Richard saw Cuomo twice on the island out of the five times he visited Puerto Rico after Maria’s landfall last year. According to her, he was cleaning houses and bringing materials.

“I believe that the government is doing their best on restoring Puerto Rico,” said Richard who added that the trip helped her learn a lot about herself and the culture of Puerto Rico.

The official death toll right after Maria passed was 64, but a Harvard study published in late May estimated that nearly five thousand people died due to the storm’s aftermath. The estimated property losses is currently more than $94 billion US dollars.