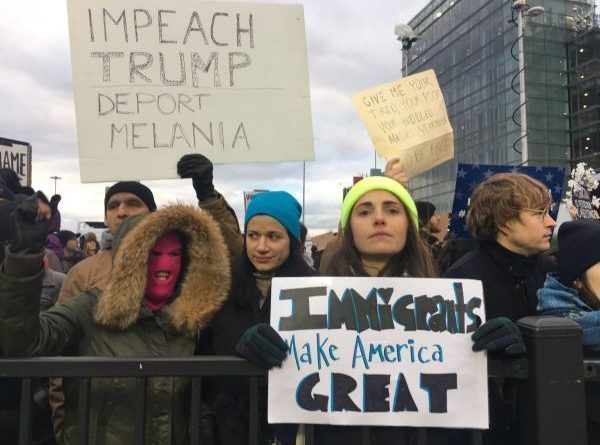 Immigrants living in NYC said they are afraid of the increase in arrests by U.S. Immigration Officials. Photo Credit: DNAinfo

The recent arrests made by the U.S. Immigration and Customs Enforcement (ICE) in New York City has left many New Yorkers on edge about their, or a loved one’s, future in the United States.

According to ICE, more than 680 individuals were arrested during the first week of February for posing a threat to public safety, border security or the integrity of the United States’ immigration system. Roughly 75 percent of the individuals arrested were undocumented immigrants with criminal records that ranged from homicide to DUI and weapon charges, officials said.

ICE officials insist that these operations target public safety threats, such as gang members, individuals who have illegally re-entered the country after being removed, and immigration fugitives who were ordered to be removed by federal immigration judges.

ICE agents claim to have conducted 240,255 removals nationwide during the 2016 fiscal year. In the New York area, 41 individuals were arrested during the February operation targeting undocumented immigrants with criminal records, illegal re-entrants, and immigration fugitives.

Social media has been in an uproar over the recently reported ICE raids around the country. Emotional New Yorkers have tweeted and posted on Instagram about ICE checkpoints throughout the five boroughs of the city. According to posts using the hashtag “ICE Raids” on Twitter and Instagram, ICE agents were allegedly spotted at major subway stations throughout Queens and Brooklyn. However, no ICE checkpoints have been witnessed or reported by credible sources.

“The best thing an understandably concerned community can do is be armed with accurate information,” wrote Williams. “To that end, we ask everyone to make an effort to substantiate information before spreading as rumors. Unfortunately the immigrant community has reason to be worried and should stay vigilant.”

ICE has been detaining undocumented immigrants with criminal offenses since former President Barack Obama was in office. However,  President Donald Trump’s recent ban on immigration from seven Muslim countries has brought the operation to the forefront in the media.

“Concerns about immigration checkpoints and raids, whether rumors or not, is evidence of the mass hysteria that has taken hold of communities across the country because of Trump,” Williams said. “This administration from day one has done everything in its power to marginalize people, create a culture of fear, and divide Americans.”

A recent chart released by the ICE states that 369,221 people were removed from the United States in the 2008 fiscal year. Approximately, 31 percent of the ICE removals, or 114,458 people, were previously convicted of a crime.  More than half of the individuals removed were non-criminal immigration violators arrested by U.S. Customs and Border Protection agents and officers at or near the border or ports of entry.

Last month, President Trump signed an executive order to stop federal funding to sanctuary cities that are withholding information from the Department of Homeland Security. Many New Yorkers are under the impression that their freedom can be compromised at any moment. However, at least 39 cities, including New York, have policies limiting the amount of cooperation their local police has to provide to fulfill federal policy, according to the Immigrant Legal Resource Center (ILRC).

“The NYPD is not currently working with immigration officials,” said Williams, adding that the New York City policy does not randomly ask people about their immigration status.

Lena Graber, the special projects attorney at the ILRC, believes that local law enforcement is better informed on how to keep their cities safe.

“Immigration enforcement is a federal responsibility, not a local one,” Graber wrote in a press release. “Our Constitution does not have loopholes, and we will not turn a blind eye to any attempts to poke holes in its protections.”