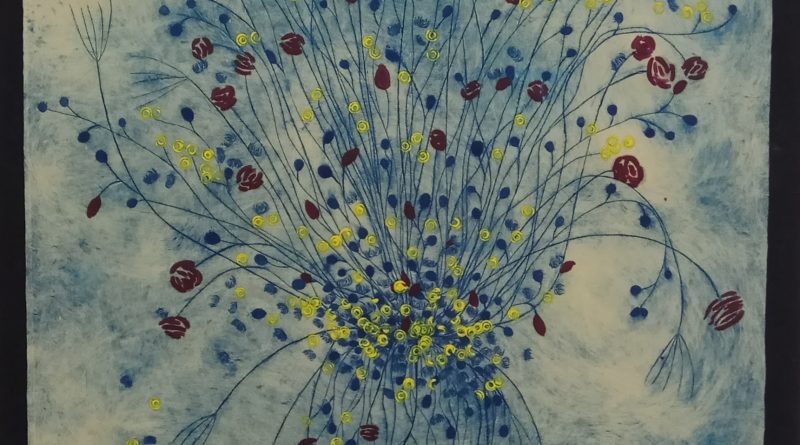 In the student studio space at York College one of the walls is lined with three artworks, two of which are in the grayscale and another with more color. Almost immediately the eyes are drawn to the more colorful one of the three which depicts a bundle of flowers with blue stems and red and yellow flowers on a 22” x 30” canvas.

Chemistry Not Love is one of the three art pieces that won studio art major Tenzing Tsakor Baro the Elena Bornstein Award in Spring 2017.

It’s an interesting piece with an interesting creation story. Baro had used a combination of two art methods called etching and printmaking to create this artwork. Etching required her to use a needle to scrape through a plexiglass until she had carved out the image she wanted. She then had to spread ink on the plexiglass before placing the colored plexiglass on a canvas of the same size.

“I had this huge plexiglass that was the same size as this (the canvas) and I had etched into it all these lines you see,” said Baro. “Everything is etched on the plexiglass with a needle so basically you are scraping through it and then you put the color in and then  you wipe it before you lay the paper on it before taking a roller and rolling over it until the color goes onto the paper. Then I went back in and painted in the flowers.”

The two other art pieces besides Chemistry Not Love are both untitled and consist of circles of different sizes and shaded in with different colors on the grayscale.

To Baro, these two works were more study pieces to her as she wanted to learn how to draw the perfect circle freehand.

“I was trying to get to a point where I could have the circle the way I wanted it,” said Baro. “I think I had done four of these, in different variations but I think this one, (the 2nd one), is my favorite. These are both done in free hand, I didn’t use a compass or anything. I needed to learn to balance my hand and I also at the same time wanted to perfect the circles.”

Along with trying to learn how to draw the perfect circle, Baro was also using the circle to represent a study of repetition in one’s everyday life and the concept of karma. She wanted the circles to represent how they both share the theme that everything always comes full circle.

“For example we brush our teeth today and then the next morning we do it again so it comes to a full circle,” said Baro. “I also think with karma it’s similar… when you do something wrong it always gets back to you somehow.”

While she may have won the Elena Bornstein Award in spring of 2017 Baro hasn’t always been an Art major. In fact, until fall of 2016, studied under the Clinical Laboratory BS program at York and was taking classes in Chemistry and Biology.

“That was a tough time but I learned a lot of things about myself and also how life actually works. In the summer I checked my behaviour and slowly I realized I was an artist. So then I switched into the art major,” said Baro.

Though she didn’t start out an Art major, drawing has always been something she has done. Even when she was studying for her science courses, she use to carry around art journals in order to draw different kinds of illustration during her spare time.

“At first I use to spend 15 minutes every day doing that (drawing) and it was the highlight of my day and then that slowly extended into a minimum of two hours and then I began to realize that my body and mind where in two different places.”

When asked what inspires her to draw she explained that to her when she sees the work of another artist it doesn’t inspire her artwork but rather confirms that art is what she is meant to pursue.

“I think every single person has their own place on this planet and I feel that this is my place. In the art world, ” said Baro.

When it comes to what inspires her artwork she says that it’s everyday life that she draws inspiration from.

“It’s more everyday life that inspire me to do art,” said Baro. It is more about what I can do with my art, and what will come out of me. I have ideas and of course imaginations from my surroundings that flow onto my work and then I just push it further and further to see how far I can go with what I have right now.”

Having just graduated last semester Baro explains that while she may not have a clear goal in mind for what she wants to do with her art and Art degree, her dream for 2018-2019 is to get her own studio space and then see where that takes her.

“I’m not fully sure yet what I want to pursue,” said Baro. “I don’t have a concentration yet but for the time being I want to explore until I get where I need to be.”