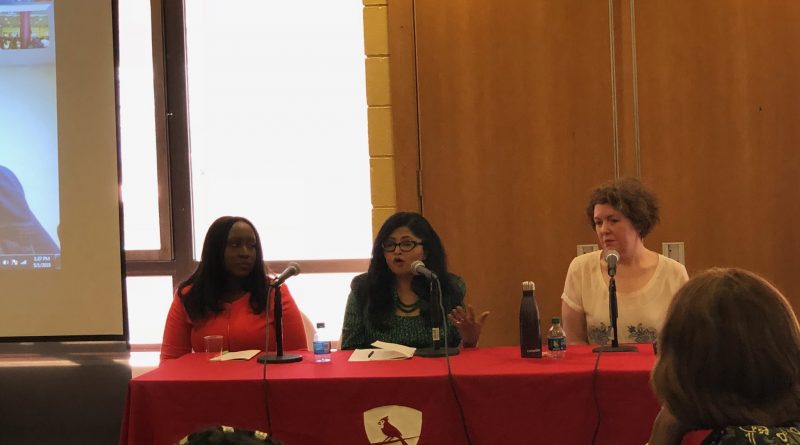 York College held another Women’s Leadership event on May 1 in the Faculty Dining Room. The conference sought to inculcate the spirit of leadership into its audience.

The conference was influenced by the 10th Annual Women Leadership Conference at Hunter College which was attended by Keila Ottero and other students at York. With the assistance of President Marcia Keizs, the students worked with their professors and other staff to bring this dream to a reality.

“The conference was so beneficial that we thought to bring it home to York where we also have many strong-willed women,” said Ottero, the president of the Helping Hands club.

The event was hosted by the Women’s Leadership Conference Committee and The Office of the President of York College. It featured a panel of female leaders that was parallel to the theme of the conference, “Owning Your Power.” The panelists shared their inspiration and aspiration for leadership.

Rubaiya Rahman, one of the panelists and the executive director of Autism Society Habilitation Association, shared how her son’s autism encouraged her to start up the organization. She wanted to provide moral and psychological support to mothers who may have been blamed, like she was, for the predicament of their children or feeling pressured to care for them. She went on to say that a disability isn’t something to be hidden, and that people have to accept you for who you are.

“Some people wanted my son and I to leave McDonald’s because he was standing in front of their table,” Rahman said, pointing out the stigmatization she faces regularly for her son’s ailment and how she hasto refrain from lashing back at people for it. “But I said me and my son were staying. It is our right as much as it is yours to be here.”

Dr. Heather Robinson, another panelist, is the chairperson of the English department whose scholarship is on language identities and practices of the students of english colonial diaspora and on feminist academic leadership and practices. As a teacher and a mother, Dr. Robinson shed light on the importance of mentoring students and mentors in any successful person’s life.

“If it wasn’t for my mentor back in college who pushed me to go for my PhD, I probably wouldn’t be here,” said Robinson.

Rashieda Smith, president of Dunton Consulting LLC, also gave her views on what it entails for a woman to own her power in this age. Dunton Consulting is a political consultant agency that operates in six different states. She reiterated that owning your power entails how you perceive yourself because no one can do anything you don’t allow them to do.

Smith said her mother told her, “you have two strikes against you: one you are a woman; two, you are black.” She explained these were facts that she came to realize in her career: that people wanted to pay her less because of the color of her skin and men felt intimidated because of her position as a female.

York 2007 Alumna Rachael Walton was also one of the panelists. Walton’s leadership experience started and developed while she was at York. She was a two year Student Government Association senator and the charter member and vice president of York’s National Association for the Advancement of Colored People chapter. Walton was also the president of the women’s club at York for three terms. She graduated with a B.A in speech communications. In 2012, she travelled to Haiti with the missionaries of the Greater Allen Cathedral where she helped rehabilitating the survivors. Walton is now working for NYC department of education and is the Queens Borough manager of Mayor de Blasio’s early childhood and pre-k education.

Public Advocate Letitia James, who is now running for the New York State Attorney General’s office, was originally scheduled as a panelist but she cancelled.

Still there was no shortage of inspiration.

“The conference was really helpful,” said Sabby Jenkins, 19. “It encompassed many issues faced by by a woman and ways to deal with those issues from prioritizing to standing up for yourself.”

The event was originally scheduled for March during the Women’s history month but was cancelled due to weather conditions.