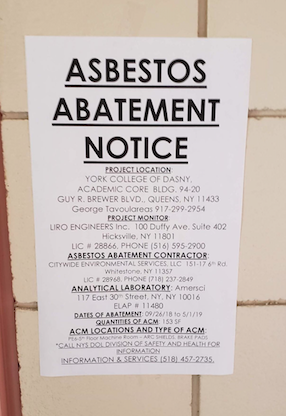 New signs have been posted around  York College’s Academic Core Building stating that the asbestos abatement period has been extended until Nov. 1 as opposed to the previous end date of May 1.

While notices were posted, no email was sent out  this semester notifying students about the extension of the abatement.

The original abatement began with an email sent out in the Fall 2018 semester to the student body on Nov. 8 stating that, due to the upgrades being done to the elevator and escalators, on Nov. 13 and 14 they “will be removing asbestos-containing materials from an elevator machine room located on the 5th floor.”

The email sent out stated that only small quantities of asbestos were being removed by a hired abatement contractor, Citywide Environmental Services, and monitored by LiRo Engineers INC. and the Dormitory Authority of the State of New York (DASNY).

According to David Patnaude, the Executive Director of Facilities Planning & Operations, all materials that have been removed and then tested for asbestos have since come back negative. However, the college is continuing the abatement as a precautionary measure as they continue to remove materials.

“DASNY, CUNY’s DDCM (Department of Design, Construction and Management) and York College will proceed with the same steps for all remaining items that might contain asbestos regardless of the negative test for the presence of asbestos,” Patnaude wrote in an email. “York College along with both CUNY Central’s and DASNY’s Departments of Design & Construction Management take the safety of our students, faculty & staff very seriously. To that end, we adhere to precautionary measures that exceed normal construction practices.”

The current notice also list more types of Asbestos Containing Materials (ACM). The older version listed only the ARC Shields and Brake Pads while the current one includes the Roof Exterior wall waterproofing/tar/flashing.

The abatement extension comes as York continues to work on upgrades they started on April 8 on the elevators in the H corridor as well as the freight elevator in the F corridor.

According to the email sent out notifying student of the closing of the elevator, upgrades are expected to last only four months with the elevators expected to be ready by the start of the Fall 2019 semester.

This is not the first time that York has undergone abatement. The college hired abatement contractors in 2015 as they fixed a leak in the roof of the Academic Core Building.