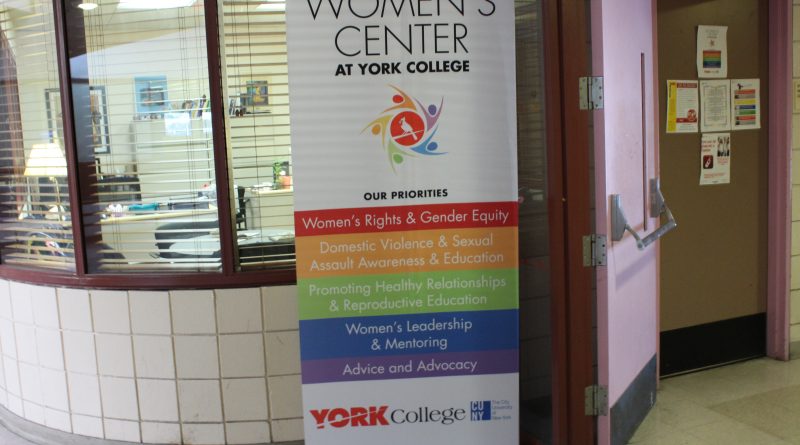 To celebrate Women’s History Month, York College’s Women’s center planned several events as it took part in the worldwide celebration of women and worked to help spread awareness on the fight against discrimination toward women.

Pandora’s Box sat down with Ebonie Jackson, the director of the Center at York to discuss the importance of women, diversity and Women’s History Month.

PB: What do you think feminism is and how impactful is it to women’s history?

JACKSON: “At its core, feminism is simply believing that men and women are equal. To deserve equal opportunities, to educations, access to business, jobs, opportunities. Things like that, that’s the kind of stripped down definition of feminism. I think in our society today, it has manifested in a lot of different gender inequities. Modern day or new age Feminism is really about combatting a lot of the policies and the systems that support that gender inequity.”

PB: What are some of the things that the center has been able to accomplish this semester?

JACKSON: “So, we just saw this film on Maya Angelou, this is was our Women’s Empowering Film Series at the end of February. She was a very dynamic woman, who lived a very interesting life. She was also an activist, was a supporter. She did a lot. We also saw a film of Shirley Chisholm, for Women’s History Month. A CUNY Grad, which is nice. Also, the first female to run for President, she was instrumental in our local politics.”

PB: Currently, there is a historical change happening. A historic number of women are running for the presidency. What are your thoughts on this?

JACKSON: “This is a much-needed change, I am very supportive of that. I like to see that we have more than one woman who is out there in the political room. If you also look beyond politics, business and education, there’s been a rash of female CEOs, CFOs that have been recently appointed. Also, in the judiciary, as judges. It’s good to have women in all places of power.”

PB: The 116th Congress has been the most diverse Congress yet. Many barriers have been broken, great positions have fallen into the hands of many females. Within this Congress, various groups of females have held many title of “first.” What do you think this means for the future of women?

JACKSON: “Representation matters, perspectives matter. We could probably avoid a lot of issues and trouble if we have more people with different perspectives and different voices at the table. It’s important for young women to see women who look like them, doing the things they want to do. It gives them a role model, it gives them something to strive for and prove. To believe that they can do, think and be in places in which they were previously left out of.”

PB: More and more women are beginning to speak up through different platforms. Right now, there is a nation-wide movement of empowerment for women. Many women are fighting and demanding for their voices to be heard. Do you think it’s working?

JACKSON: “We have a voice, we have power, we’re also not a monolithic group. There’s a lot of diversity. Even within the women who have come into Congress. That’s important, representation matters, they are our legal representatives in the government. Having AOC, Ilhan Omar, people like that who representing us in government is important.”

PB: Even though more and more women are speaking up, it is a struggle for many others to fight for for their voice because of repercussions, as it was in the case of Marielle Franco. What do you think can be done to help women move past this?

JACKSON: “Sadly, that’s is not the first time something like this has happened. I think when women stand up in every culture, there’s always some pushback. In some places, some violent pushbacks. I do think this is a wake-up call, that it’s a call for all of us to stand up together. These days in this country, there’s slightly more women than men, there’s no reason for us to be as marginalized as we are.”