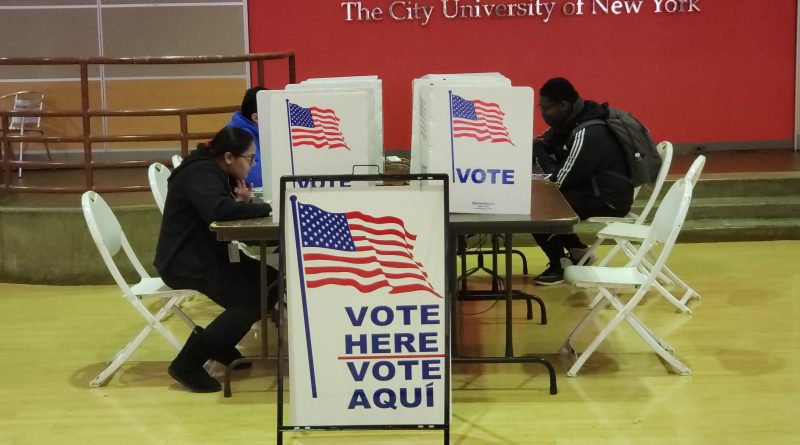 Students casting their ballots for an SGA Election, which typically would take place in the York College atrium, is available from the comfort of their homes this semester. | Photo courtesy: Pandora’s Box

The Student Government Association at York is holding a Special Election to fill five vacant Senate seats, with thirteen candidates in the running. Students have until Thursday, November 12 at 11:59 PM to vote. Four of the thirteen candidates spoke with Pandora’s Box about their plans if they are granted a seat.

York senior, Candice Gordon, is a biotechnology major who says her position as a senator would fill the void of what she calls, “forgotten majors” by York College.

“As a biotechnology major, there aren’t many people enrolled in it, probably 30 of us. For those smaller majors we tend to be overlooked by those in charge, overlooked by professors, overlooked by staff in terms of opportunity, and chances for networking, and ways to put us out into the professional environment. I hope to contribute a pathway for those who tend to be forgotten, to interact with those in charge and remind them that we are here too.”

The sense of neglect by the school is a common theme Gordon expresses. She feels that when the COVID-19 pandemic began, students’ concerns were simply dismissed by many professors.

“I want a chance to go beyond the professor level to go to the administrative level or whoever is in charge. We are in a time where accommodation and empathy needs to be expressed and understood. It shouldn’t be just a consensus that students want to complain or make an excuse. I want to articulate to those in charge that we’re not just complaining, we’re not just making excuses.”

Of course when the dust settles and everyone can toss their masks up in the air, York junior and health science major, Sarah Herrera, wants to increase social activity between students on campus which she feels is lacking.

“I would like to get students out there when it comes to socializing with each other. I feel that York sometimes has a reputation of it just being a commuter school. People think there’s really not much to do as you just come to school and you go home, but I don’t see it that way. I think that York is a great school and we should find ways to get students connecting with each other.”

Candidate Cami Melson’s titles at York go beyond being a senior in the journalism program– she’s also the Womens’ Basketball Team Captain. Melson says she wants to fight for increased student athlete representation in the Senate and a better connection between athletes and non-student athletes.

“I want to be a voice for what students need and want and a voice for those who haven’t been heard. No one’s really talking about the athletes when it comes to certain decision makings or just discussions and we’re seeing that come up now after a couple of conversations with the Athletics Department and general administrators and student bodies. We’re coming together and saying, ‘Oh, there’s actually some things that we could talk about or didn’t know if we hadn’t reached out.’ I just want to be a conduit between the two.”

York sophomore and political science major Mark Ogbuehi describes himself as a “big dreamer” and carries his ambitious plans for York under the umbrella of a campus environment. Ogbuehi stresses the importance of better access to food on campus as one part of this issue.

“Because we are so limited to only Starbucks, and because there’s always a long line there, which causes people to be late to their classes. We can include more stores at York, instead of people going all the way to the {Jamaica} Ave. We have to fix that.

Ogbuehi mentions the hesitations students have to staying on campus after their classes are over or completing their assignments, and how providing more on campus activities for students to be involved in, could keep students attracted to campus even after they have finished their duties for the day.

“I feel like a lot of students quickly come in to get their work done and go home. We should definitely find ways to have clubs that are out there that might interest people.”

Taking on a Senate Position During a Pandemic: Can They Do It?

Despite the challenges presented during COVID-19, candidates remain confident they can accomplish their goals in the senate.

“Living in a pandemic had a lot to do with why I decided to run. I’ve been part of the student government for a while but I didn’t have the time to dedicate to it fully. Before when I was commuting to school I was commuting two hours both ways. Now that I’m able to do it remotely, that’s so much time added that I can dedicate to student government. It’s this remote atmosphere that is giving me the opportunity to assume a position right now.”

“Some people may think that everything online will be a bit of a challenge, but I see that as an opportunity because we’re able to interact with more people in a faster way and we can talk to more people in larger groups. I’m sure working virtually will have some positives that will also oversee the negatives.”

“I think it might put members of the Senate at a disadvantage. I’m sure the ones who are in it now are at a disadvantage; they can’t come together and do things on campus they were doing before. I also think it’s been beneficial in the sense that we can connect with people outside of campus that we probably couldn’t have connected with before. I think it’s a give and take, but I’m looking forward to just seeing what I can do while I’m here at least.”

“Well now I am able to reach out to more people virtually. It helps me change the style in which I communicate with people. I feel like this is a new way for me to pick up the skill of communicating over the phone, talking through Skype, Zoom or whatever it may be.”

Students can vote for up to five candidates and must submit their York e-mail address and EMPL ID once they reach the eBallot website. Check out the York College website for more information on all the candidates.