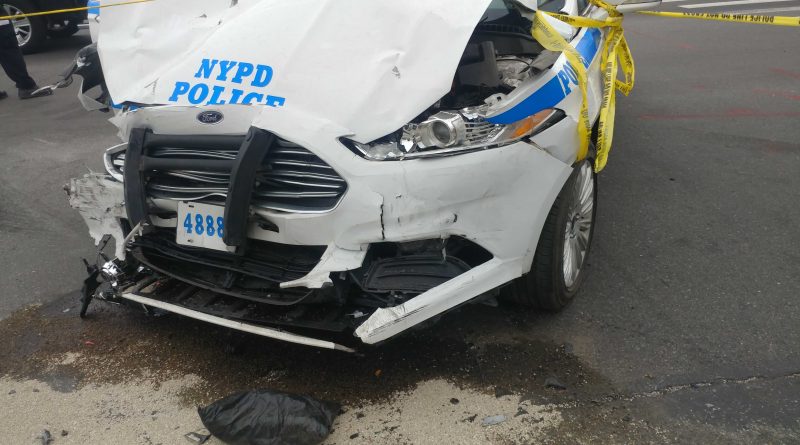 With a loud bang, the area in front of York College became a hazard following a three car accident involving a police cruiser,

Just before 2 p.m. on Apr. 12, the cruiser collided with an SUV at the intersection of Guy R. Brewer Boulevard and Liberty Avenue.

According to police, the cruiser was travelling down Liberty Avenue responding to a call while the SUV was turning onto Guy R. Brewer Boulevard. Following the crash, the SUV lurched onto the sidewalk, nearly rolling into the gate surrounding the campus. Moments after the accident, the cruiser’s rear passenger door was found lying on the sidewalk.

While there were multiple injuries the accident did not involve anyone affiliated with York and did not result in damages to campus property, according to York’s Public Safety Director Rufus Massiah.

Both officers in the cruiser sustained minor injuries and were taken to Jamaica Hospital while a third person was taken to Queens Hospital Center, according to police and FDNY reports. A third vehicle was involved in the accident with no injuries reported.

For approximately four hours after the accident, Guy R. Brewer was closed to non-emergency vehicles between Liberty and Archer avenues. All traffic was redirected to 160th and 165th streets and the 165th street entrance into the east parking lot was opened while two NYPD traffic agents worked the intersection.