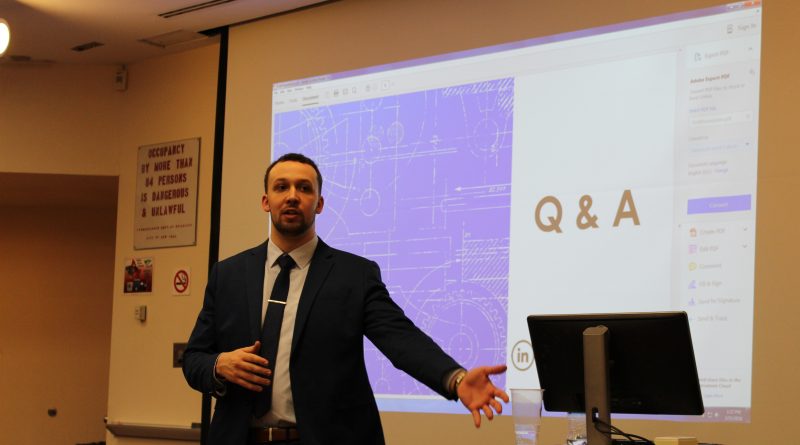 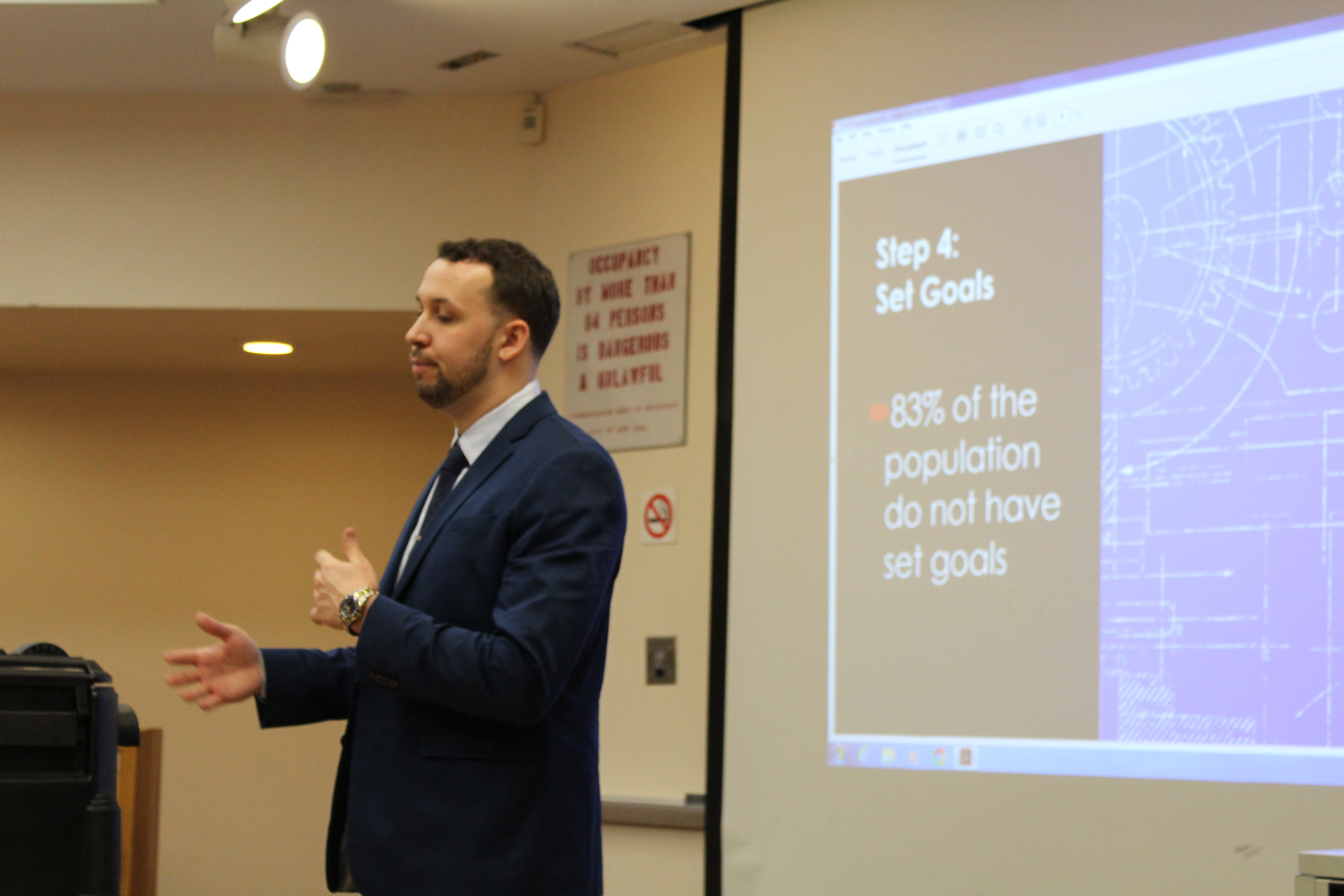 The entrepreneurship and marketing club held a Student Success Blueprint event hosted by York College 2017 alumnus and Content Coordinator for the Shark group Matthew LeBris on March 15 in the Academic Core Building where LeBris shared advice on how to be a successful student.

LeBris, 25, majored in Entrepreneurship and had a minor in Accounting. During his time at York, he became the president of the entrepreneurship club for the 2016-2017 academic year prior to graduating, he also was an ambassador for CUNY StartUps where he and his team won the smart pitch competition mobile app invention and split $2,000 in cash. In addition to other academic accomplishments, he was a dean’s list recipient three times and was nominated as York Excellence. He also interned at the Shark Group, a brand management and consulting agency, in the area of business development where he was hired after he graduated.

Despite his apparent academic success, LeBris started his presentation with the many challenges and obstacles he faced when he was younger.

He was told by family members to pursue sports as a career after he graduated high school. As a senior he was told to play sports since he was good in basketball and baseball. In 2009, when LeBris was on the pitcher’s mound just two strikes away from striking out a batter, he tore the labrum in his shoulder.

“I called my coach and told him I was going to come out after I threw my pitch, and he looked at me and said you have one strike left. Just get through this,” said LeBris. “I’m not a quitter and I didn’t want to quit, so I threw the next pitch and dug out. I literally couldn’t feel my arm.”

As he was rushed to the emergency room, LeBris realized how quickly his baseball career came to an end.

In 2012, he faced just another failure. He failed out of Queensborough Community College. He admitted he never took school seriously until he came to York.

“I remember getting the letter to my house and my parents looking at me like what are you doing? We thought you were going to class all this time,” said LeBris.

Two things helped him to get back on track: the big ideas he had in his head and his mom’s battle against cancer. LeBris felt challenged to continue his higher education and get a degree.

“We all go through things and is about how we perceive them and how we grow through them,” said LeBris.

Throughout the presentation, LeBris shared tales and stuff he has learned from books. One of those tales was the story of the positive dog where a man from a small town wanted to go and see a wise man because he felt he had two hungry dogs inside of him. The man basically wanted to know which dog was going to win this internal battle. The dogs were named positivity and negativity. The wise man replied to the man that the dog he feeds the most would be the winner.

LeBris told the audience that any hurdles and challenges they may face will be easier to overcome if they surround themselves with positivity and positive people.

The short presentation was divided between four steps. The first step was about being prepared. LeBris added he has the 6 p’s: proper prior planning prevents poor performance, written on a board on his room.

“When you are prepared, you are golden,” said LeBris. “You have to prepare for a test and homework. This translates into the outside world as well.”

The second step was to get a mentor. LeBris encouraged students to take advantage of the resources they already have on campus and to establish connections with their peers, professors and faculty at York. He asked Professor of Business and Economics Olajide Oladipo to become his mentor when he was an undergraduate student.

“Find a mentor. Either the person next to you, it doesn’t matter race, sex or religion,” said LeBris. “A mentor is going to guide you through all these obstacles, challenges, and whatever else you face. They will be able to guide you through tests, homework, internships, jobs, how to do interviews, so it’s important to have someone in your corner, to have a support team.”

One tip he shared is that students should go to their department and talk to a professor they have taken class with, but if they could also find someone outside of campus, that would be great as well.

LeBris has worked closely with Daymond John, the founder of the Shark Group and a New York Times bestseller, and he said that John believes mentorship is the number one reason why businesses succeed.

The third step was networking. LeBris said that talking to anyone at York could be helpful because, “you don’t know if you could be sitting next to the person who develop a successful social media platform like Facebook, or the next Elon Musk of the world.”

“When I was at York, I felt I was a big fish in a little pond, but after I graduated I realized how small the fish I am in a really big ocean,” said LeBris. “Take the opportunity now while you are in a close environment where people are always next to you no matter what.”

The final step was to set goals. According to LeBris, 83 percent of the population doesn’t have set goals. He told students to write down their goals and to be very specific.

He added he lays out his goals that way because the goals that will expire in six months and five years will help him achieve the 10 year goal. He writes down his goals and keeps them on his wallet and said he got that idea from comedy actor, Jim Carrey, who grew up in a poor family, dropped out of college when he was 15 years old, moved to L.A. Calif., to pursue his dream and wrote himself a check of ten million dollars and kept it on his wallet.

“Every time he went into his wallet he saw that check, and just so happens the first check he got was 20 million dollars,” said LeBris. “So he doubled his goal and that’s the power of goal setting.”

Tyniece McKelvey, the president of the Marketing club, shared that she also keeps her goals in her wallet because she believes in the law of attraction which dictates that we have the ability to attract anything we envision.

“I want to be a publicist so I know that’s my goal and I keep that goal written in my wallet,” said McKelvey. “It’s like setting it into stone and putting it out to the universe.”

He recommended that students have not only an internship related to their major, but to also intern in a different area to know what they really enjoy.

He has brand marketed his blueprint student success event through social media and added that LinkedIn is one of the social media platforms he uses the most.

“LinkedIn has helped me a lot of time. What I would like to say is that imagine if you could find jobs in your sleep, you actually can with LinkedIn,” said Joshua Jimenez, the president of the entrepreneurship club.

Jimenez added that even if a person doesn’t have much experience to show, they should pursue their hobbies and work on any talent they have.

There was a Q&A after the presentation during which students asked LeBris what he did as an intern at the Shark Group that subsequently helped him to get the job.

LeBris said that he talked to everyone at the agency and let them know that he was there to put in the work.

“I made sure that if I didn’t walk away with a job, I would have contacts that would help me get one,” said LeBris. “If I had a deadline, I would surpass that deadline. I would always underpromise and overdeliver.”

Samantha Rojas, a senior marketing major, said she felt inspired by LeBris’ presentation to keep on working on her blog and to start her own YouTube channel.