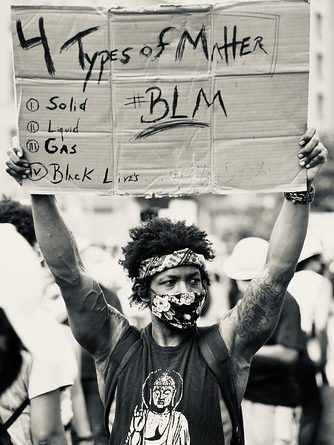 By Kristina Sierra and Deandra Johns

The amount of time George Floyd laid unconscious and pinned beneath three police officers, showing no signs of life.

Floyd’s death has since turned into a national phenomenon as “Black Lives Matter” has become the primary concern of many Black business owners in New York City.

As people began to fill New York City streets to demonstrate against the brutal act, the outcry for justice from people from all backgrounds proved the entering of a new era of being black in America.

In mid- August, Mayor Bill de Blasio launched the “BE NYC” initiative to help struggling Black-Owned businesses across New York City. This campaign has sparked an increase in shopping at Black-owned businesses as White Americans and non-Black people of color have begun to show their support to Black communities through “voting with their dollar.”

As a result of this new reform, CBS News reported that searches for “Black-owned enterprises near me” on Google LLC reached an all-time high last month in the U.S. Yelp has also made it easy for consumers to browse for “Black-owned restaurants.” Uber

Eats announced that it will suspend shipping charges on orders from Black-owned restaurants by the end of the year.

The recent killings and attacks of Ahmaud Arbery, Breonna Taylor, Elijah McClain, George Floyd, and Jacob Blake has sparked national outrage that has stretched from political offices to local streets. The Black Lives Matter movement has been one of the most powerful forces behind the uproar of demonstrations, campaigns, and support that has put many in a position like de Blasio’s to become an advocate for black lives.

According to the BE NYC webpage, “Black entrepreneurs built New York City. This historic public-private partnership will ensure we can come together to support them, and give them the recognition they have deserved for so long.”

Teens Take Charge, an organization launched in 2017, has inspired many young adults to become active citizens through the power of their voice. The movement centers around the present-day educational inequities that many students go through in their academic careers. Members of the movement make it known that racial disparities have no place in our schools.

Nelson Luna, a co-founder of Teens Take Charge, believes heavily in de-segregating our schools. Since the recent rise of the Black Lives Matter movement, Luna has realized that his organization, with the credentials it already has, must help those who struggle with racism daily as well.

“As we have shifted our content on our social media, we began to receive positive feedback,” said Luna. “Informative posts have helped us connect with other amazing students combatting the many levels of discrimination that exist in our community.”

Appearances of Teens Take Charge on many New York outlets prove its success and impact on the people.

“Being youth-led, it is very inspiring to see the youth inspiring other young adults,” said Luna.”The growth of our organization is not centered on one idea, and that’s what makes us successful.”

Growing up in Harlem, co-founder Pamela Bailey always had an affirming experience for her identity and her culture. Still, after her freshman year at Boston College, she realized that externally that wasn’t always the case.

She decided to build a platform that would create dialogues that empowered students of color, particularly within the Black community.

SimplyVyntage, a social media platform, focuses on mentorship, innovation, and transforming Harlem’s spirit and bringing it to the world.

“I decided to co-found SimplyVyntage to help other people learn about the connections between leadership and creativity from my experiences,” said Bailey. “We can create a difference. We can add to the conversation and build the futures we want.”

Since the recent protests, the organization’s social media page has become a platform for spreading awareness of current events. Their weekly live videos include informative details on how to become an active citizen.

“We have to have conversations about what is happening right before our eyes,” said Bailey. “Those conversations are also challenging when you feel like your life doesn’t matter in the hands of those who are here to protect us.”

Professors and other notable people on Bailey’s college campus have praised her advocacy in black communities. The optimism in many of these black-owned businesses results from the sudden realization that many people have that African- American communities are suffering right before their eyes. The trigger in support, sadly being the death of a black man in police custody, ultimately was the catalyst, in the beginning, of this trend of togetherness.

As a result, according to the U.S Senate Committee on Small Business and Entrepreneurship, “The number of businesses in our minority communities continues to grow, adding to our competitive advantage. Over the last ten years, minority business enterprises accounted for more than 50 percent of the two million new businesses started in the United States and created 4.7 million jobs.”