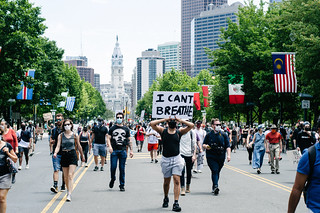 A protest rally against social injustices, member holds a sign that reads “I CAN’T BREATHE” Photo by | Flickr

The issues of police brutality and racial injustice remains a critical factor that may play a crucial role in how New Yorkers vote in the 2020 election. While President Trump calls for law and order, the Black Lives Matter movement continues to chant “No justice, no peace.”

New York City continues to be a battleground in the fight for racial justice as we draw closer to November. Protests, riots, and crime have persisted on the streets throughout the five boroughs as New Yorkers express their outrage towards the police.

“People are angry and tired of waiting for change that seems to never come,” said Denise Melo, 20, a journalism student at Brooklyn College and Flatbush resident. “Our voices are not being heard and if our pleas for changes continue to fall on deaf ears then things will get worse out there.”

These efforts have been met with violent attacks as recent as October 3. Where BLM protestors on bicycles were plowed into by a Queens teenager, Victor Kent, 18, with his vehicle on 5th Avenue in Manhattan as reported by Gothamist. The attack resulted in two protesters being injured and Kent was subsequently arrested that following Monday.

New Yorkers continue to march in solidarity for George Floyd in Minneapolis, Breonna Taylor in Louisville and Jacob Blake shot seven times in the back in Kenosha. The list goes on and on.

No matter how loud the protests have been, President Trump has made it clear that he has sided with police by making decisions like committing a million dollars to the Kenosha Police Department during a visit to the city. According to an article published by The New York Times, President Trump neither mentioned nor spoke to Jacob Blake or his family and deflected any questions that pertained to the shooting.

The article also mentioned how President Trump scolded reporters who asked about social justice and racism during his visit to Kenosha,Wisconsin and painted protestors in a negative light by saying,

To New Yorkers, Trump’s remarks towards the BLM movement comes across as dismissive while making the assumption that protesters and rioters are the same group of people.

“Donald Trump on several accounts has shown that he does not support the BLM cause,” said Kevin Spies, 32, a U.S. History teacher at Murry Bergtraum High School in Manhattan. “That’s just who he is as a person and at this time it’s sad.”

Spies has been a resident in New York since he was 23 years old. To him, Trump has shown little sympathy for these tragic events of police brutality toward Black Americans and has on multiple occasions downplay the severity of the situation.

When asked in an interview with CBS, “Why are African-Americans still dying at the hands of law enforcement in this country?” Trump responded with, “What a terrible question to ask, so are white people. More white people, by the way.”

Trump went as far as trying to compare a golfer missing a three-foot putt to a police officer choking by shooting an unarmed black man in that same interview.

“Donald Trump has lived a privileged life so he can’t understand certain social issues which is why others who lived like that supports him.” said Tilon Bobb, 20, Flatbush resident and Political Science major at Brooklyn College.

Trump’s relationship with New York over the last few months has gradually deteriorated. On September 2, the administration published a five-page memo which threatened to cut federal funding from “anarchist jurisdictions” referring specifically to New York City along with other major cities, according to USA Today.

This did not go over well with the citizens of New York along with Governor Andrew Cuomo who had a few words for Trump.

To some, this was seen as a betrayal to New Yorkers and Black Americans and that  the U.S. president has not been for all people of the U.S.

“White supremacy and racism is like the American secret sauce; sometimes it’s used directly and indirectly and these days it is used indirectly,” said York College Political Science professor, Michael Sharpe. “Donald Trump has turned the corner for us because we have not seen anything like this in a very very long time.”

“I think that Donald Trump is an insane narcissist and racist,” said William Hughes, York College journalism professor and Jersey City resident. “He is one of the most dangerous people in the history of this country.”