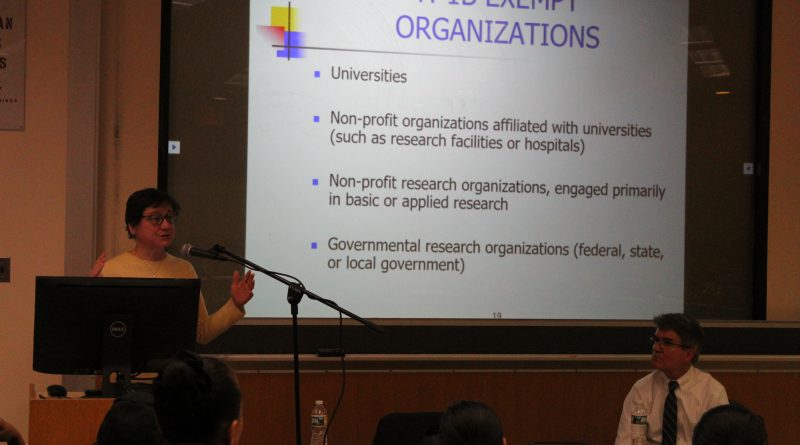 Left to Right: Helen L. Konrad and Mark B. Rhoads

By Greis Torres and Angel Adegbesan

York College Career Services invited immigration attorneys Mark B. Rhoads and Helen L. Konrad to address questions regarding work opportunities in the U.S. for students with F-1 and J-1 visas on Feb. 13. The event was also sponsored by Queens College.

Rhoads and Konrad provided legal work options that are available for F-1 and J-1 visa students in the U.S. Both are directors in the Immigration Practice group at the firm McCandlish Holton. They were able to clarify any questions in a Q&A session with PB, students and attendees who shared inquiries on working authorization and education visas.

Rhoads provided the Optional Practical Training work card and the H-1B program as a common form of extension on foreign students’ visas. The most common type of student education visas are the F-1 visa and the J-1 visas. Unfortunately, these visas prohibit a student from legally working under an employer in the United States and they only permit students to stay in the U.S. for the duration of their education. However, an immigrant student can apply to extend his or her visa to continue to live and work in the U.S. by applying for a work authorization.

Immigrant students with a bachelor’s degree from any country or a U.S. master’s degree can apply for the H-1B visa. The H-1B visa allows to be employed for six years but it has a lot of restrictions. It can only be applied for after a degree has been completed and it can only be filed by an employer. Therefore, H-1B requires an employer that offers a job that requires at least a bachelor’s degree and the student must hold the degree. A degree holder in Chemistry with an employer at a coffee shop cannot qualify for an H-1B, but a degree holder in Chemistry with a lab employer can qualify for H-1B.

Question: How does the Optional Practical Training work for foreign students on student visas?

MARK RHOADS: In the 12 months that you have the card, you can work for any employer doing any job anywhere in the United States and the employer has to do nothing. All they have to do is to decide to hire you. There is a window to apply for the card. The window is up to 90 days before completion of your program or up to 60 days after completion of your program. The recommendation is to find your program completion day on the calendar and then, count back 90 days. That is the first day you can file for OPT work card.

Question: When you get the card, can you start working immediately?

If you have a job offer already, make the card effective the day after program completion. That way you are ready to go to work as soon as you possibly can. Once the card becomes effective, you only have 90 days of unemployment time. That means from the effective date of the card, you only have 90 days to find a job. If you haven’t found a job within that 90-day period, then you are out of status. You have to keep that timeframe in mind and that is part of the strategy issue for you to decide when you want the card to become effective within that 60 days after program completion.

Question: What other option do students have besides the Optional Practical Training?

Question: What is the process for the H-1B visa program for foreign students?

HELEN KONRAD: H-1B is the most common work visa that is out there. It is a total of six years of work authorization and it is given to you in increments no more than three years at a time. Since it is employer-specific, an employer has to file it and when it gets approved you can only work for that employer. H-1B is not six years for each employer, it is six years altogether. OPT had one card that let you work for multiple people for 12 months without getting a new card but H-1B is different.

When an employer applies for H-1B and it gets approved for three years. If the student wants to work for another employer after a year, the new employer has to file its own H-1B to show that the work requires a kind of degree. It could be approved for three years. An extension could be granted with this new employer, but only for two years which makes a total of six years of H-1B work authorization. The H-1B is good for a whole lot longer than the OPT but it does have more restrictions that you have to be aware of because you do not want to fall out of status.

QUESTION: Do you have a list of companies that will sponsor H-1B for foreign students?

QUESTION: What is the guarantee status for getting the H-1B visas?

HELEN KONRAD: Timing becomes everything with H-1B. Congress has put a quota or a limit on the number of brand new H-1B that can be approved every year. There is no quota, or limit, or lottery for OPT and you are going to get it when you complete your program. During the government’s fiscal year, it approves 85,000 H-1B applications filed by employers and for people who have never held it before.

QUESTION: Could you expand on the quota process in layman’s terms?

HELEN KONRAD: The government will start accepting H-1B applications on April 1, and the H-1B would be effective Oct. 1. If the government gets more than 85,000 applications, then they stop taking new ones because they have hit their limit. They do a lottery, but you have to time it right to make sure that you are even considered in the lottery. If there are two quotas, first they are going to look at who COMPLETED a U.S. master’s degree and they will take all those and pick 20,000 out of them. There is going to be some left over because more people with master’s degrees applied that were not picked. All those people not picked then goes into all the other applications, now they pick 65,000 out of that. So, having a U.S. Master’s degree definitely improves your odds because there’s two chances of being picked.

QUESTION: What happens if a student is not picked in the lottery?

HELEN KONRAD: Some employers are exempt from the 85,000 quota which means that it doesn’t apply to them and you can do H-1B at any time of the year. Those employers are universities and colleges. Any college would be an employer that can hire you as long as the job requires your type of degree to do. Non-profit organizations affiliated with colleges like hospitals and research facilities are also examples so, you will be exempt from the quota.

QUESTION: What other options do you have besides H-1B or OPT?

MARK RHOADS: There are very few options available, and most of the time you are not going to qualify for them. If for example, you are a citizen of Canada, Mexico, Singapore, Chile and Australia, there are excellent options similar to the H-1B. Even if there are quotas for them, they never run out.

Another option is called an L-1. An L-1 is for an individual who works for a multinational company. If you are fortunate enough to be hired by one with operations in the United States and in at least another country outside the United States and you work for the company outside the U.S. for at least one year, then you may be able to transfer back in using L-1. It is an option, but it is a very limited option.

Another option is an E visa. It is just for citizens of certain countries that have treaties or trades and commerce with the United States. If you are from one of these countries and you get a job in the U.S. with a company owned by citizens of your home country, you may qualify for an E visa.

QUESTION: Besides the H-1B, L-1 or E visas, what other option does a student have?

MARK RHOADS: Almost nothing. Most students re-enroll in school if they are not selected in the H-1B lottery because that is about the only option you have unless you want to start considering work opportunities in your own country or in any other country around the world. Many countries have much more open immigration rules than the U.S. like U.K. or Canada or Australia.

Pandora’s Box: What are the wages for these visas like?

MARK RHOADS: For OPT, there is no wage requirement other than the employer has to pay at least the minimum wage. For H-1B, there is a wage requirement, the employer has to show that they are going to pay the H-1B worker at least the same wage paid to U.S. workers who do similar work. It is called the prevailing wage. It means the wage that is prevailing in the U.S. for a U.S. worker must also be paid to the H-1B worker.

Pandora’s Box: Will the status of a student as a J-1 or F-1 visa immigrant affect the chances of getting a green card?

MARK RHOADS: No. You can only do a green card in two ways. Through a family member or an employer. If you are going to get a green card and you don’t have a family member to sponsor you, the only option is an employer. You have to get a work visa to go work for the employer because nobody is going to want to sponsor you unless you work for them first. So, you will have to get a temporary work visa like OPT and H-1B to work for that employer.