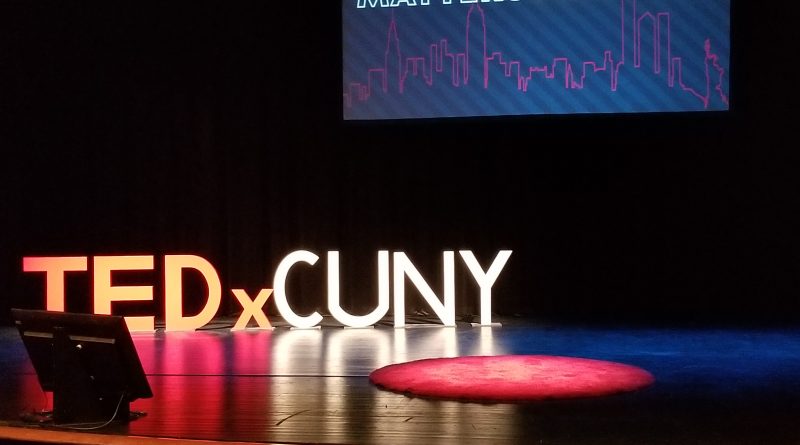 The event was held at the Gerald W Lynch Theater at John Jay College. Hundreds of students filled the lobby beginning at 9 a.m. with anticipation for the sold out event.

Students were greeted with TEDxCUNY goodie bags filled with; a notepad and pen, bean chips (hmm… thanks!?), little chocolate filled snacks, corn chips; chips made out of corn kernel (umm… thanks again!?), and other little snackables.

Some of the day’s speakers consisted of:

Each speaker had the floor for about 15-20 minutes accompanied by their own visuals to add depth to their presentation. The event went until 5 p.m., and was split into three sessions.

Bruno performed a beautiful poem on embracing and honoring of her Trinidadian culture while assimilating into American culture. She spoke about the perils of American girls questioning and mocking her flagrant accent. She also talked about her ability to jump in between two different cultural customs; her native one, and her adopted American one.

Ashour talked about where he sees the future of nutrition going and it’s not what we all thought. His idea has six legs.

After receiving a degree in nutrition, he began to explore how other countries got their protein. He realized many American food products have some amount of whey protein, which is a dairy protein. He found that crickets are a high source of protein and apparently aren’t that bad tasting.

Apparently every 100 grams of cricket contains 69 grams of protein. Compared to the same portion, there is 43 grams in beef and 31 in chicken.

I’ll take his word for it, but it’s going to be a while before I decide to willingly eat an insect. You can visit the Aspire Food Group website for more information.

Amongst my favorite presentations was Owens.

Owens was arrested in 2011 as part of a mass gang-indictment case in Harlem at the tender age of 17.

Owens said she had fallen madly in love with a popular drug dealer and would do favors for him, including holding his firearms. She had always been an academically superior student, but back then her love for her boyfriend was the most important thing to her.

After serving time, she was sent to Africa to teach at an all-girls school. She discovered that many of her students had low self-esteem and were exhibiting the same self-destructive behaviors she had because of their boyfriends.

So Owens started Soul Sistas, a women’s empowerment group aimed at helping those young ladies learn to love everything about themselves and practice better judgement and self-care.

Now she is an administrative assistant for the Center for Constitutional Rights and still speaks to young women in her community about self-love.

Overall, this was a great TEDx talk and I’m looking forward to what powerful speakers the event invites next year.