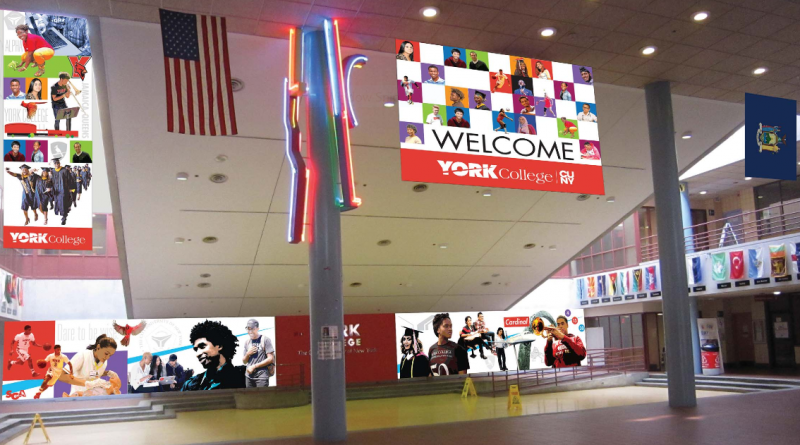 Walk on to the campus of York College on any given day. Notice what you see and what you feel underneath your feet. You might be saying to yourself, “Well, I see the school building, cars, buses and other vehicles speeding down Liberty Ave.” Or, you could be saying, “I see the dull facade of a school building, bricks coming up from their foundation and poor lighting.”

In October, York’s Student Government Association proposed a plan to solve some of these problems. Banners and posters featuring students socializing and participating in various activities are planned to be placed across campus to “improve the visual look and feel of the York campus,” according to SGA.

“The goal is to uplift the campus,” said Vincent Banrey, Vice President of Student Development. “If you walk around the building now, it’s kind of bland. There’s nothing really striking.”

Many students agree that the campus is “bland” and could use some cosmetic work. However, there are students who don not all agree that banners are the best solution.

“It would be great if they had a collaborative mural opposed to the banners,” said Alexander Richardson, Freshman, English major. “Banners could get ripped down and destroyed.”

Some other suggestions included those from York senior, Yasmin Roldan, who said that these ideas would not fit for beautifying the school.

“I think the school could use better lighting or new paint to help the place look more alive,” Roldan said.

When asked about these suggestions made by students, Banrey said, “the only thing I can recommend is that students meet with the SGA president, Krishna Fnu, to share those ideas.”

Banrey goes on to mention that as York is going through renovations of the escalators, stairs and front entrances. Stating that there are other places around campus that are planned for enhancement.

“There are other projects on the table that are going to be phased in, for example, painting classrooms,” which addresses Roldan’s concerns.

As for a mural in the school, some of the design renderings of the banners would feature pictures of students that are edited to look as if they are murals. The process used to create the design is called image posterization.