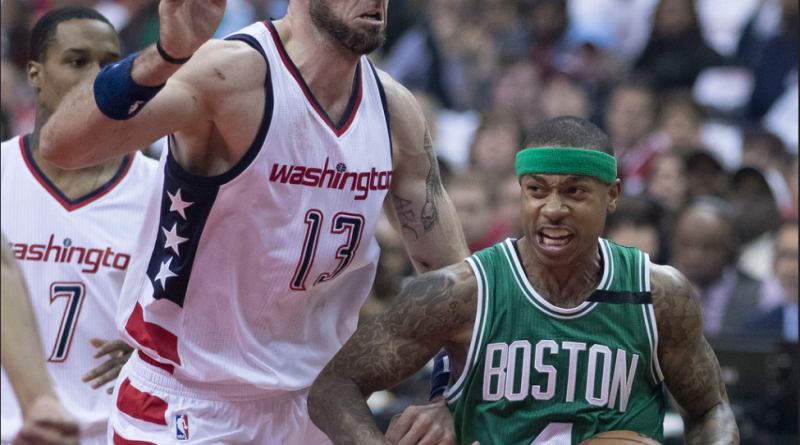 The NBA basketball team Boston Celtics is one of the seven teams left in the NBA playoffs.

Key player on Boston Celtics guard, Isaiah Thomas, has been going through a lot lately. Thomas has been mourning the loss of his younger sister, Chyna Thomas, who was killed in a car accident, just one day before the Celtics first-round playoff series against the Chicago Bulls began, in Washington on April 15.

Chyna Thomas’ car reportedly drifted onto the left shoulder of the I-5 in Washington State and traveled about 50 feet before hitting a large pole, According to ESPN. Isaiah Thomas received the news of his sister accident after he participated in his team’s practice Saturday afternoon.

“Being here is what makes me, I guess, sane. It makes me feel somewhat normal through these tough times,” Thomas told ESPN reporters.

April 30 was the first game against Washington Wizards, even though Celtics won and Thomas scored 33 points, he lost his front tooth during the game.

First quarter of the game scored 20 to 5, Wizards up by 15 points. With 6:33 left at the clock, Thomas runs into small forward on Washington Wizards Otto Porter’s elbow. Thomas picked up his tooth, took it to the bench and returned to playing.

“It just bothers me to talk. My tongue goes right through my tooth. I’ve never had dental problems. I’ve always had teammates that I’ve clowned them about their tooth being out and now I’m one of them. Hopefully, we can replace it as soon as possible,” Thomas said in an interview after the game.

Porter had no idea what happened until he saw the replay of it. “I saw the replay and I came off a tight curl and I kind of reached back for the ball and I guess he was right there,” Porter said. “I kind of got him. The crazy thing, I didn’t feel it until after it happened. I Didn’t even know it was him. I didn’t see him pick up the tooth or nothing. I saw him smile one time, I was like yo when did that happen, then I saw the replay.”

In the second game, Boston Celtics won again scoring 129 – 119. Isaiah Thomas had 53 points, 4 rebounds, 4 assists, and 3 steals. On this day his sister Chyna Thomas would have turned 23.

“Everything I do is for her. She’s watching over me. My family and my friends they tell me to keep going. My sister wouldn’t want me to stop. Only thing about it’s that once I leave this gym I’m hit with reality that she’s not here. That’s the tough part,” Thomas said in the ESPN interview after the game.

Game 3 and 4 Boston Celtics lost, Thomas only scored 13 points game 3 and 19 points game 4. Game 5 Boston Celtics won leaving the score 123 to 101. The series was now 3-2, Celtics needed one more game to win to advance in the finals. On Friday at 8p.m at Washington Wizards home court, Wizards ended up tying the series by winning by one point. On Monday May 15 game seven was played, the Celtics ended up winning by 10 points. Thomas scored 29 points, had 12 assist and 2 rebounds. Thomas thought about the game all night, he knew it wouldn’t be easy. “We believe in each other, its a special moment for us.” Thomas said in an interview after the game.

Boston Celtics advance in the playoffs to play against NBA team Cleveland Cavaliers. First game will be played on Wednesday May 17 at 8:30 P.M. Isaiah Thomas still manages to keep fighting and playing hard. Being an important factor in the team especially during fourth quarter. People still wonder how he does it and continues to keep fighting all that he has been going through but he still does.