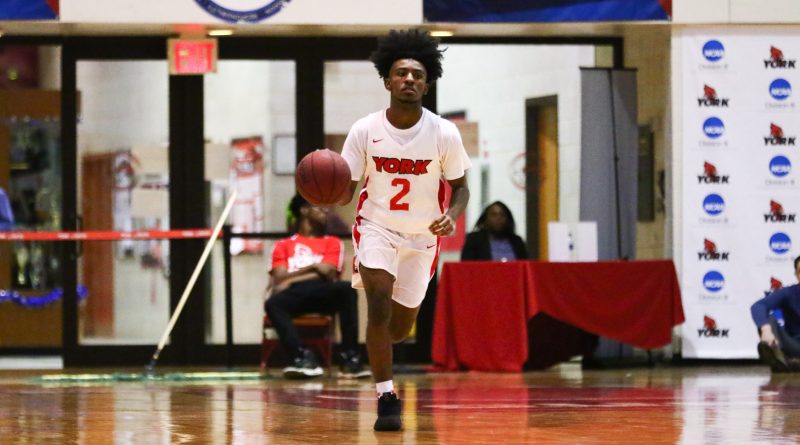 Balancing life can be hard; adding sports and school to the mix can make it harder. For many, this balancing act is overwhelmingly stressful, but Devine Chisholm finds a way to make it work.

Devine Chisholm, 18, is a freshman at York College and plays guard on the school’s basketball team. Although he is new to this team, Chisholm is very familiar with receiving success as a basketball player.

At John Dewey High School in Brooklyn, Chisholm’s team ranked fourth in New York City. Individually, he achieved the 1000-point milestone and in his first season at York College, he was honored with City University of New York Athletic Conference’s (CUNYAC) Rookie of the Year Award.

“My love for basketball began at the age of two when my dad first put the ball in my hands,” Chisholm said.

He started playing on his first organized team at seven-years-old and has not stopped playing since. He refers to basketball as his first love but stated that he knew how important receiving a quality education was.

“My academic life is strong because I take pride in being the best student I can be,” Chisholm said. “My coaches and my teammates also help me take pride in that and my parents don’t play around when it comes to school.”

York College has enforced a rule for all student athletes. They must attain above a 2.5 GPA in order to participate in athletics. Chisholm stated that he does not feel he is a “school person” but is motivated by this rule to do great in school because he would not want to be ruled ineligible.

“I know that the term is student-athlete and without school, I would not be able to play basketball,” he said.

Motivation for Chisholm to succeed in his academics also comes from his younger seven-year-old brother. Chisholm said his little brother looks up to him and he finds it necessary to set a good example so that his brother will follow the same path.

The basketball season parallels with the school semester but Chisholm mentioned he always focuses more on school. He stresses that basketball could be taken away from you at any time while you’re playing so you always have to have something to fall back on.

There are many stereotypes about student-athletes that give people the impression that they are not academically inclined. Another is that other students often complete assignments for student-athletes while they are busy playing their respective sports. When asked how he felt about these stereotypes, Chisholm voiced his displeasure about the beliefs.

“I think it is unfair,” he said. “Just because we play sports does not mean we don’t put in the same type of dedication into our academics.”

Because Chisholm juggles school, sports, and a job on the weekend, he sets time aside for himself to relax. Whenever he gets the chance, Chisholm enjoys bowling.

Professional bowling seems like an option to Chisholm, but his ideal career choice would to play basketball professionally. He acknowledged joining the NBA (National Basketball Association) would be a difficult venture, so an attempt at overseas basketball is a more plausible choice.

The freshman has yet to declare his major, but he decided to study journalism so he could have the opportunity to become a sports journalist.

There are many young aspiring athletes that believe they are only required to be amazing at the sport they play. Chisholm offered some advice to those athletes.

“If you don’t think getting an education is important, you might as well not play that sport because wherever you go, education comes first,” he said. “Without education you can’t play your sport, school comes first and your sport second.”