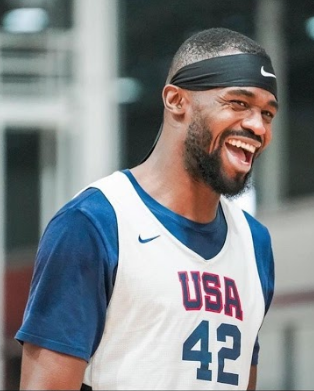 From the pool of 16, the USA Basketball 3×3 player selection committee will name four men to represent USA Basketball at the 2020 FIBA 3×3 Olympic Qualifying Tournament, March 18-22 in Bengaluru, India. The top three finishing men’s and women’s 3×3 teams will earn a place in the 2020 Tokyo Olympic Games 3×3 basketball competition. Esonwune is currently ranked fifth in top 10 FIBA 3×3 players from the United States.

Esonwune started his basketball career at York from 2007 to 2011. He had no prior basketball experience prior to his freshman season with the York Cardinals. He immigrated from Nigeria with an aspiration to be a soccer player.

“The head coach and assistant coach were playing on the staff side,” Esonwune said of that day in 2007.  “And when they saw me playing, they came up to me and asked me what sport I played. I told them that I didn’t play basketball but soccer and they laughed and told me that “no, you’re going to play basketball. “Trust me, young man” the coach had said.”

“So, that was it, I went home, and I got a call from my soccer coach about the transition and next thing you know, I was on the basketball team,” Esonwune added.

“Honestly, I think York played the most role in my success,” Esonwune said. “If there’s a pie chart, I’ll give York about 60 percent because when I first came there, I didn’t think I was good enough to be on the team.”

“But as the year went by, I think my coaching staff saw something in me that I didn’t see,” he added. “They kept telling me “you’re going to be good” , “just keep working hard” ; and, every year, I saw the results. If someone believes in you as much as they had believed in me, telling you “you’re going to be good”,  you see the results yourself and that makes you want to work even harder to exceed expectations.”

Esonwune earned dual bachelor’s degrees from York in Interdisciplinary studies and Accounting. He currently works as an accountant in Queens.

“I like how my life is right now,” Esonwune said about future aspirations and life goals. “Everything I’m getting right now is just a blessing added on. I couldn’t ask for more than what I have now. How many people could say they had an opportunity to play for USA training olympics? For that, I’m very blessed for this opportunity.”